Audix DP7 is a premium drum mics kit designed for a standard 7-piece setup. In many aspects, it is superior to Shure and a number of other entry-level drum mics, though the price difference is tangible. This set is ideal for tracking / recording, and assumes you have a decent gear overall. Perhaps, a bit too expensive for beginners, but it will sound noticeably better comparing to the cheaper mics. Whoever chooses Audix DP7 will get a solid set that will last for many years and won’t be begging for an upgrade!

When it comes to drum mics bundles, there are usually two pitfalls:

Manufacturers naturally want to maximize their sales, so they create all kinds of bundles out of their existing models. In reality, such mics have a broader use and aren’t necessarily honed for drums. Thus despite the overall mic quality, you may often discover a lack of the necessary edge for that application. On the other hand, some manufacturers start inventing a whole range of new models to accommodate for different drums. The caveat here is that often what comes out is but a bunch of generic models that may be good but not good enough…

Now, with DP7 you actually avoid both of those problems. Audix among other things does specialize on drum miking and each included model is well thought of. Those mics can be purchased individually and many people order them. This is also a good thing because if you lose one, you don’t have to worry about finding a replacement. However, if you bought them separately they would cost you much higher, around $1,100 just for the mics. That is excluding the aluminum case and mounting accessories.

Talking about accessories, they don’t have any issues that are so prevalent among similar mic bundles. The clips are hard to break but easy to mount. They sit well on pretty much any drum kit, never going loose during performance and that’s a great thing. Here are the mics that are included in the package: D6 (kick drum), D4 (floor tom), 2x D2 (rack toms), 2x ADX51 (overheads) and I5 (snare). I shall now describe them one by one and afterwards share my overall impression of the set. 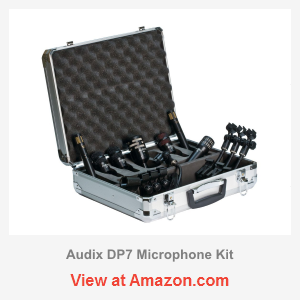 The kick drum is the foundation of any drum set so this mic would be a most important piece. D6 is specced for 144 SPL, which is lower than majority of kick mics, yet in reality it doesn’t produce any noticeable distortion even during aggressive play. On contrary, this mic works wonders with rock and heavy metal music. It has a punchy attack sound that easily cuts through without being harsh or obtrusive. The low end is tight and both ends sound slightly more detailed than AKG112 or Beta52a. Overall, this is a great mic and it can sound nice out of the box.

Audix D4 is meant for a floor tom; it is a way smaller than D6 yet it still brings a significant low end. A versatile mic, also perfectly suited for smaller kick drums. The sound is tight and clean, and has a distinctive “oomph” to it, but no mud whatsoever! Audix D2 add more body and warmth for rack toms – in my opinion they aren’t as great as D4 but still of high enough quality and they get the job done. Both mics are hypercardioid and have an excellent off-axis rejection.

ADX51 are used as an overhead pair. Those lightweight, small diaphragm pencil mics produce clear and accurate highs, which won’t go wrong with any kind of setup. To be honest, I didn’t expect much from this pair but it turned out very decent. Finally, Audix I5 is an all-around mic that is very similar to SM57. Both mics work equally well for the snares and considered industry standard. I5 is maybe a tiny bit brighter but you won’t hear the difference.

Audix DP7 is an excellent bundle, not only for the quality but also for the price. With this kit, you can get that good sound without having much to worry about the EQ, compressors and other advanced stuff. All of those mics are time-proven and they make an excellent match. Durability is another nice addition – they are quite hardy, especially the D-series. Then a good road case makes them impossible to break while on tours. Even the mounting is a breeze (maybe except for D6) so I can’t recommend them more highly!