Audix ADX51 is a very bright small cardiod condenser mainly used as overheads and not without success. The unit is known for being included in Audix drum kits; however, some drummers realized they actually like the ‘sound’ of ADX51 overheads better, and began using them outside the kits in custom setups, sometimes even grabbing them over higher-end and more expensive SDCs with technically better specs. The thing about this mic is it sounds great out of the box, without the need for experiments and fiddling with EQ curves. If you can’t afford taking chances with different mics, this could be your best choice.

If I were asked to review this mic in one word, I would say “bright” – like hell. There is about 10 dB difference between highs and lows, which is a bit bizarre but the overall transition is so smooth and gradual, and without any noticeable dips or bumps along the way that it actually makes sense. The idea here is we don’t really need any lows on overheads – their purpose is to brighten the sound, highlighting the cymbals. But if cut too abruptly they would sound artificial and wouldn’t mix well. Despite the brightness, those aren’t too harsh on the ears but technically every mic has some amount of distortion. 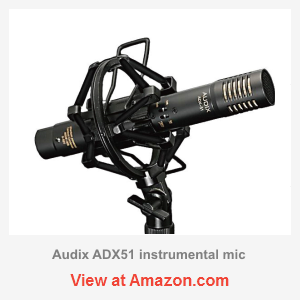 I would say it’s a decent tradeoff for the price, especially for something that ‘sounds’ right. On paper, we could find a number of high-end mics with much better specs, but once plugged you realize they don’t really work the way you expected. Talking about specs Audix does not provide complete information on ADX51, which is a bummer. For instance, I couldn’t find signal to noise ratio in their spreadsheet but once again it’s not all about specs. Are there are better mics? Yes of course, but some are outright expensive, some would only work for particular setups and others… the majority are actually both.

I still find Audix ADX51 fits in more as a universal overhead solution, and it does a good job handling that treble. There is no lack of clarity, a good amount of brilliance (even though the highs roll off a bit prematurely at 15 kHz), and of course, those SDCs are expectedly crispy. The amount of treble does seem a bit overwhelming at first, but it works in the mix, so why complain about something that works? Having covered the brightness aspect, the miniscule amount of bass that keeps continuously rolling off is quite disappointing. The good thing, this is absolutely not needed for overhead miking.

The bad thing, it is hard to think of any other application. ATM450 for example I could use for a whole lot of different things, it wouldn’t necessarily always provide perfect results but it could easily handle an acoustic guitar at least. With ADX51, it is not even worth trying, everything just sounds too thin: an acoustic guitar becomes ukulele, a double bass becomes violin – well you get the idea. Maybe in certain cases when you don’t really need the bass portion of the sound below 100 hZ and actually require a bright mic, for example in order to cut through a dense mix, only then it could be worth using.