Rode Wireless GO II is an excellent miniature professional wireless system consisting of two (2) transmitters, 3.5mm output and an on-board recorder. It is a successor to a highly successful first generation of GO with more features added to it, although the audio quality of both is same. Transmitters or the body packs have built-in mics to get you started, but more often than not, it is used with plug-in lavalier mics. Any generic 3.5mm and Sennheiser mics are compatible. Wireless GO II also has features and settings that can be accessed via Rode app, such as safety channel, etc. Moreover it provides USB connectivity so that you can quickly download your recordings.

The overall audio quality you’ll get from this setup will for the largest part depend on the quality of the mics you are using. It does not depend much on the transmitter in this case, since the noise produced by the system itself is much lower than that of any lavalier mic. Therefore the strategy for improving quality comes down to upgrading your mics. Importantly, Rode does give you this option. You can experiment and easily replace your external mic or fall back to built-in. The other two things of interest with Rode Wireless GO II would be – the stability of transmission and susceptibility to radio interference.

Since personally having many options to works with, some of which are quite expensive, I didn’t expect much from the built-in. Also being a mic reviewer I’m usually a bit sceptic whenever the price seems too attractive like in this case with Rode Wireles GO II. However, I was pleasantly surprised as it produced very little noise on it’s own. Sure enough, the built-in here isn’t better than any $50 mic: despite the claimed smooth frequency response you can hear some colour and other imperfections. Yet, because of low self-noise you can easily make quality YouTube videos using it. Let’s hear some samples:

I believe it’s pretty decent for starters. Once again, there may be a some sibilance, a little distortion and a lack in transparent, extended response but it can get the job done. What’s awkward however is the placement. Even though the transmitter is quite small, it still stands out and weighs your shirt down. Therefore it is much better to just buy some cheap $50 plug-in mic even if that doesn’t provide any improvement in sound quality. If you want to improve the sound though, aiming for professional audio, just get yourself a quality lavalier. For instance you could use Sennheiser MKE 2, available on Amazon – it has a compatible connector.

The claimed range for this system is actually a whooping 200 meters, although in reality this would need a perfect weather, open space and direct line of sight. So what happens is, other wireless devices as well as different circumstances may affect the range. Having concrete walls between the receiver and transmitter is what usually greatly inhibits the range. But thinking of it, it’s not like you could possibly film someone behind a concrete anyway. Still, the distance is impressive and the signal propagates much further than any wi-fi router.

Having some range allowance is also beneficial as it converts to signal stability and reduces the probability of dropout. I have not personally tested the maximum range, but the reviewer in the video claims that both Wireless GO and GO II proximately worked up to same range of around 150 meters, while the range of latter was only slightly superior. As for EMI, I haven’t experienced any, even after boosting the audio and specifically checking for it. It is important however to make sure you are using the right cable.

If an external mic has a modular cable, then using a wrong one, e.g. TRRS-TRS instead of TRS-TRS or even TRRS-TRRS or vice-versa… or plugging the wrong end could inevitably lead to RF interference simply because different cables wire the ground (or shielding) differently.

As mentioned, both have the same audio quality. The only difference is in added features and functionality. If you don’t need that functionality then you could as well just buy the first generation, provided you can buy them cheaper. I will leave that up to you to decide, but personally I would choose GO II simply because of the on-board recorder.

GO II can record up to 40 hours of 24-bit audio. Which means you don’t need a Zoom recorder anymore, besides it is much more compact than previously popular Zoom recorders. The idea of using a recorder is that you get a better quality audio than when plugging into a phone or camera. The drawback is having to sync audio later, but the improvement is worthwhile especially for cellphones. 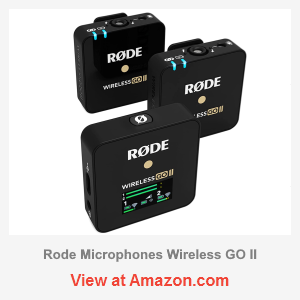 * If you’ve looked at the pictures of GO II, you will usually see two (2) transmitters:
Makes perfect sense… however, if you don’t need two transmitters for some reason – there is another option to buy Rode GO II with a single transmitter, which is also available on amazon. Just do some search and maybe you would be able to save money.

By glancing at the pictures, it is easy to miss just how small and compact the whole system is. Go ahead and measure it – it’s just a size of a matchbox! Needless to say, its footprint is miniscule, in fact it is the smallest professional wireless transmitter and receiver pair that I know of. Rode Wireless GO II also scores high in terms of durability, the only moving parts there are the hinges and they are well protected. Other than that, it is comparable to a cellphone. It has a very responsive, color display that shows when you might be clipping or about to clip. The screen is glued to the body in a similar manner, which prevents water getting through. Not waterproof but water-resistant for sure.

Same applies to internal batteries. It supports quick charging just like your cellphone, and I guess the life-expectancy of a battery should be similar too. What I mean by that, well I can recall my Samsung S8 battery started to deteriorate after 4 years of daily use, which translates to almost 1500 charge-discharge cycles. If you don’t use it daily, it could potentially work for a decade. However, in an unlucky scenario things could still go wrong so that you would need a battery replacement. And there is no easy way of doing that, other than sending the mic back to Rode for battery replacement. This might be the only con so far, otherwise it’s almost perfect.