Pixel Voical Lark is a wireless system consisting of two lavalier mic transmitters, a receiver and a portable charger box. It doesn’t have many features: a single volume control for both mics, outputted as single channel via 3.5mm TRRS connector. Then there is a noise reduction mode, which can be enabled individually on each transmitter. Finally, it delivers a real-time monitoring for headphones, and an additional input for mix-in; the headphone amplifier is quite powerful. When unused, simply put back all the gadgets inside the box, and let them charge. Overall, the sound quality is decent and the compact transmitters is certainly an advantage. However, it does come out quite pricey, costing almost as much as professional transmitters, e.g. Rode GO II.

Although the receiver and transmitters do contribute to the sound quality, we are going to focus on the mics while treating the system as one, since the mics inside the receivers are non-replaceable. In terms of frequency response, it lives up to the claim: covering the range from 100Hz to 10Khz it proves more than enough to reproduce a human voice. The EQ is just about right, not too bright nor mellow – provided you attach it on your collar and use it for vocal recording only. Voical Lark will also mix two channels into one when using both mics, which also eliminates the need for post processing, so you can immediately upload your videos.

However, this is a poor choice for those who like more flexibility. There should be an option to output both channels separately as stereo, since it is using a TRRS connector, which has this capability. Only a mentally challenged user could possibly underappreciate such a feature. Any even barely sane sound engineer would consider this a must. Especially, when you pay almost $200 for such a device. And to my surprise there is no option to adjust each mic’s volume individually in the mix. Sure, you could assume the volume to be roughly the same (considering both persons wear it as instructed), but this is a strong assumption.

Of course, it isn’t that bad unless you are frequently miking interviews. For someone who just does occasional blogging it could be just fine. And the second transmitter is always nice to have as a backup, especially if the battery runs out and you have to keep recording. Occasionally, when you want to record two persons, it would still produce much better results than when using a single mic – that’s for sure. It might be worth noting that the monitoring output on the receiver is very beefy. It drove my 16 Ohm Beyerdynamic headphones very easily, to the point where I thought I might blow them up, and it did preserve all the low end too.

These functionality nuances got me a little carried away. What’s more important, when reviewing Pixel Voical Lark, is to understand what kind of mics are being used there. Most definitely those are front address, small lavalier mics inside the transmitters. Also known as lapel mics. While for the most part, they do sound quite fine, in the absence of sound they start producing a lot of self-noise. This is a well-known problem of any mic in this class. While professional mics, for example, Tram, DPA, Sanken, Countryman, etc, still produce audible noise, it is just about tolerable. The consumer lavaliers are generally horrible in this regard. 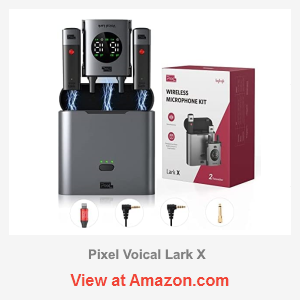 In a nutshell, lavs are generally noisy, in a quiet setting they record sounds that do not exist. It first, it may resemble the ambience but if you were to switch to Tram TR50 for instance, all those weird noises would be gone, and only some gentle rustling would remain. If I were to guess the actual quality of the mics used here in regards to noise, I would say they sound like $50 lav mics. Let me reiterate that as follows: you can buy a $50 mic (with a wire) that will sound exactly the same as the $200 system [only without noise reduction]. Sure enough, you can’t fit a pair of Trams in there for this price. But consumers are generally pretty bad at math. Because they’ve spend $200 on the system, they may often expect it to sound like a $200 microphone, oh yes and with the noise that of an LDC.

Therefore, not everyone’s expectations are going to be met here. This isn’t just specific to Pixel Voical Lark, but to any other products in this price range too. Unless you buy a processional lavalier worth around $300, that is, only for the mic – you will find yourself pretty much screwed when it comes to self-noise. The actual self-noise of Voical Lark is unclear, the spec says it’s 79 dbA SNR, but this makes no sense because a professional TR50 is only 68 dbA for instance. In reality, my wild guess it’s at best 58, though no one really knows. Maybe eventually someone will measure it but I don’t have the necessary equipment. The transmitter could also be contributing to the noise spectre.

The good news, it is only crucial in a quiet setting while outside it’s generally not at all an issue. And another good news is that we have the noise reduction mode. Naturally, it does what it does, but at the same time it also reduces the mic’s self-noise. So in the end, a clever post-processing gives us a clean audio without the need of using an expensive, professional lavalier. The downside of noise-reduction is that it smooths out some details that could be of interest. For instance, someone who records ASMR, wants to keep all those chewing ‘noises’ and do not want them reduced. Voical Lark isn’t very sensitive either for the purpose of ASMR recording.

Here is the actual recording sample. In the first part you can hear the background noise, which is just mostly the self-noise. There is no HVAC running, only a computer. The second part is the same environment but with the noise-reduction mode on. As you can hear, the difference is tremendous. If I were to make a Vlog or Youtube video at home, I would most definitely use the noise reduction setting. There is a possibility of occasionally jumbling some details but overall it sounds more professional. The recording has been done via SSL2+ in 24 bits lossless format. ’4k’ mode was used, which adds a little brightness, though I think it wasn’t even necessary.

Now that I’ve thoroughly covered the mic, it’s time to mention a few things about the wireless system itself. Although I haven’t used it much, the battery never ran out while testing and the charging box has plenty of charge left. According to the specifications, the battery used in Voical Lark box is ‘Lithium Ion Po’, and it follows the latest charging protocols QC 2.0 and PD 3.0, so expect the same charging speeds as your modern smartphone. The range of the system isn’t particularly great, 20 meters in line of sight is just about mediocre, compared to other wireless systems such as Rode GO II’s 200 meters range. When there is a concrete wall between the receiver and transmitter, you must use the provided antennas or you may lose signal.

Definitely, there are plenty of uses for Pixel Voical Lark that take those factors into account. For instance, you could be filming yourself doing some yoga, a couple meters away from the camera. This is totally fine. Especially if you like the minimal footprint and don’t want to wear a bodypack, just clip on the mic transmitter onto your bikini and you are all set. Hope this is a good enough example. However, a bad idea if you are filming in a large hall, moving far away from the camera and have lots of other wireless devices that could potentially interfere with a rather weak transmitter of Voical Lark. Do not use for what it’s not intended! Also note that you will have no option to upgrade, unlike with bodypacks where you could eventually plug a more expensive lavalier.

In terms of durability, I would say it’s about average. The receiver has an aluminium shell, so it’s not just plastic. Same goes for the charger box, so once you put the components inside there, they are pretty much protected. Nevertheless, I have identified some of the weaker parts, of which you should be mindful. Those are mainly hinges of the clips. For the transmitters they are probably fine, unless you accidentally step on them. For the receiver the hinges are a bit thicker, which is good but the attachment of cold-shoe to the hinge is a horrible design as it puts lateral strain on the hinge. The plastic base doesn’t hold the receiver tight enough for my liking. Should be fine atop of a camera in a horizontal position but attaching to your belt could be risky.