HyperX QuadCast is a multifunctional USB microphone mainly designed for gamers and streamers. It has a variable pickup pattern control, a gain knob and a headphone jack for monitoring. Right on top of the mic there is a handy touch-activated mute button. It even includes an internal pop filter, which does an okay job and outperforms Blue Yeti without a pop filter. All those features can already ease life for a user, but the most important and unique feature is that it comes with a compact shock mount stand by default. I can’t think of any other USB mic that offers all this especially while retaining a competitive price tag.

HyperX QuadCast has a neutral tone and for the most part, it provides an unhyped sound with a clean and detailed midrange. The proximity effect in cardiod mode isn’t very strong, which means it does not vary as much in the bass response as you get closer. However, the amount of low does not disappoint, it may not sound as solid as a radio broadcast mic, yet it just naturally represents your voice without taking anything away. Blue Yeti in comparison actually sounds more hyped, with slightly scooped midrange, it sounds brighter and more intimate when up close, but there is also more hiss in Blue Yeti.

When it comes to vocals and music, tonally QuadCast doesn’t have any problem, so it can capture the entire frequency range without added color. If you want to upload a YouTube video with this mic, or play your favorite instrument via streaming – this is all fine. What the mic is not intended for however is recording. You must understand the strengths and weaknesses of this device and keep your expectations in check, because the fashion for the USB mics changes rather quickly. If you record and compare uncompressed audio, you will be able to see some distortion, which is otherwise unnoticeable.

In a controlled environment, both mics actually sound fine for the USB standards. What actually makes the difference in a day-to-day application is the availability of the suspension that comes with QuadCast. Calling it a shock mount may sound ambiguous especially from a non-sound engineer’s point of view. Since this is HyperX, I am sure a lot of gamers will be reading this without seeing the importance of it. What this shock mount actually does is it mechanically isolates the mic from the table. You will be surprised how much noise usually comes through from a typical gaming desktop without this suspension.

Have you ever wondered why the keyboard strokes and mouse clicks sound so annoying when making a video call from your computer? That is because it is being amplified mechanically. A part of the sound comes from the air but another significant part comes from mechanical vibration. Those vibrations also significantly boost the low frequency part, so that each stroke has a deep rumbling to it. Now add up all the unintentional bumps on the table or even the chair, humming of the fans in your computer, neighbor’s subwoofer and even the vibration of a distant railway train. Well, I hope you get the idea!

A decent shock mount can make a huge impact but not only they are expensive (if you choose to buy a standalone solution) you will also have to purchase a boom arm, which may actually exceed the cost of your mic. Every other USB mic we’ve reviewed so far does not come with a shock mount. At best, they come with a pop filter but that’s it. HyperX QuadCast also has an internal pop filter though it’s rather just a piece of foam on the inside. It does an okay job and it’s better than nothing. The internal EQ is also adjusted for this, so it doesn’t impact on the clarity. I personally haven’t experienced any popping at all. 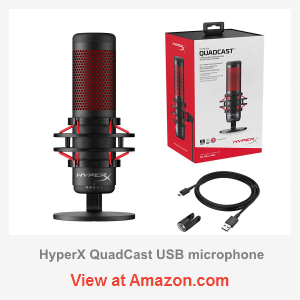 If you are familiar with Yeti USB, QuadCast provides the exact same choice of polar patterns, namely cardiod, omnidirectional, bidirectional and stereo. Those can be adjusted with a knob at the back. The main and go-to pattern is cardiod, but in case you are unfamiliar with the patterns, I will quickly cover each of them now. Cardiod picks up sounds from the front and rejects sounds from other directions to a good degree. By minimizing the sound from other directions, you effectively reduce background noises and room reverberation, which manifests as if you were talking far away somewhere in the kitchen.

Cardiod pattern also introduces proximity effect. This simply means when you are close to the mic you will sound more bassy and intimate, though the QuadCast’s proximity effect isn’t particularly strong even compared to Yeti. Omnidirectional allows capturing sound from all directions, especially useful when you have more than one speaker at a time; however, it introduces more noise and reverb. Bidirectional pattern captures from front and back only, perhaps it is useful if want to capture the sound from your speakers, it also gives strongest proximity. Stereo mode is obvious I think… it too potentially introduces more noise, as it listens to the sides rather than directly in front.

This may sound trivial but the users seem to give a lot of importance to the mute function. Blue Yeti is an old mic but it still remains popular thanks to this reason, it has a mute button while other mics don’t. HyperX QuadCast did in a way copy all of its features but not without improvements. The mute button of the QuadCast is actually on top of the mic, it is touch activated and it’s very accessible. When the mic is on it will light up with red color, so there is no confusion about it. However, unlike a mechanical solution it seems to suffer sometimes from being activated on and off repeatedly from a single touch.

The mic also has a gain control, which is great – the knob itself is big and located at the bottom. There is no way you can miss it, but it’s also possible to bump into it accidentally. This control does not adjust the gain from 0 to 100 but it’s rather a fine-tune adjustment. You will still have to set up an appropriate value in the settings and I actually like it this way, as it gives you less chance to screw up. At the back, there is also a headphone jack for monitoring your mic output in real time. Unlike other mics however there is no way to adjust the headphone volume nor ‘in the mix’ volume aside from the sound settings.

This mic feels a bit unusual, it is actually very light; I believe it’s mainly made of plastic except for the grille. That said it is very tall unlike any other USB mic you’ve seen before. The good thing about it, it is actually brought further away from the table and a bit closer to your mouth, so this way it sounds better. The connector used is mini-USB, which is the same as Yeti, so this is fine. I have reviewed CVL-2004 before with micro-USB and it was a disaster. HyperX QuadCast works for both Mac and PC, and even PS4 and it’s certified to work with TeamSpeak and Discord. No connectivity issues detected.

Overall, I see it as a great pick. The sound may not be the best for recording but for things like YouTube, Twitch, streaming and gaming in general, it is ideal. Especially if you like the black and red theme, because unfortunately there is no way to turn off the lighting. But what’s far more important is the absence of background noise; the mic is not too hot, it gives a good and natural voice timber and comes with a whole bunch of useful features such as touch mute. Then once again, there is this exclusive shock mount… and an okay pop filter, what else do you want? QuadCast well deserves its price tag and even more!