Shure MV7 is a dynamic USB mic with a decent sound quality that emphasizes comfort and usability for everyday use. The idea behind MV7 was to create an easy to use solution for podcasting, mimicking the legendary SM7b. Despite my initial disappointment, the mic turned out to be a success, relatively. More compact and cheaper than the SM7b, it also doesn’t require a preamp or an expensive audio interface. The quality is actually quite good for a USB mic, so there’s nothing wrong with falling in love with it, while working on your computer. Although compared to the original SM7b, honestly, the performance is barely half-ass baked, if you wish to know my personal opinion. 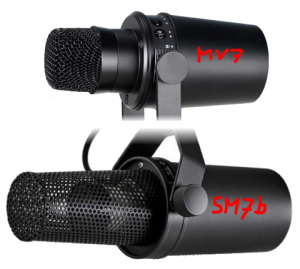 Shure MV7 is a dynamic mic and it sounds like a dynamic mic. I could go into great lengths describing it but I don’t really feel like. I just want to get down with this review as quickly as I can. Why? Because no matter what my opinion is, this mic has proven to be a quite very viable choice for USB recording, and it’s also among the most popular out there on Amazon, so it’s a choice that’s always worth considering. In terms of quality, it certainly comes on top of the Audio-Technica and Maono dynamic mics; however, the difference isn’t as big as one would hope. It is marginally better in frequency response but the integrated preamp and ADC interface circuit are much better.

To date, MV7 does hold the title of the best dynamic USB mic, though compared to Maono it’s almost 4 times as expensive, so… no surprise there. Anyway, I still need to give some more details about its performance or it would be unfair to Shure. The frequency response of this mic doesn’t extend above 10 kHz, which is actually a bummer, but aside from that, it’s quite neutral. The advantage here comes from the choice of digital EQ presets where you can switch from flat mode to high-pass and presence boost or both. Another very neat thing there is the availability of limiter and compressor, with a variable intensity even, so you can further fine-tune to improve the sound. 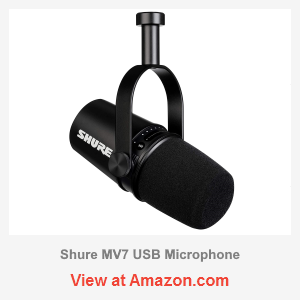 While it does have a neat post-processing and digital conversion that can never be overrated with USB, and which you won’t find on mics of other brands usually, there still are some reasons to hate this mic. The rant mostly comes down to a comparison with the SM7b and there is another major disadvantage – a somewhat flimsy USB-connector, which once again wasn’t an issue with the old dynamic mic. It’s not clear why Shure still uses micro USB, other than just because it did use it before with the MV5. However, the MV7 came much later, so technically USB-C could be a better choice, or even much better – the old mini-USB or even a huge ass type-B for the durability – why, there’s plenty of space!

Though if only the connector was the problem here… the problem is rather with the concept. What disgusts me about this mic is how it mimics the SM7b (by both the looks and model number, obviously) while failing to deliver the traits of the original SM7b. The SM7b had an extended response, better proximity and a sweet spot that gave it a more uniform response even when facing slightly off or not talking directly onto mic. The MV7 seems to have nothing in common with the former. It does give you a rich, decent sound that is nice for USB, but it’s just not in the same league. The grills and capsule design are very basic as well; it does not have the complexity of the former.

Overall, the opinions about this mic are divided: there are two camps, those who absolutely love and those who can’t help but hate it. Despite some haters, the large majority still love this mic; it is quite very popular today and easily makes it into top-5 USB mics on the market. And despite falling behind in performance compared to the SM7b, it does have some advantages, such as more compact size, cheaper price, availability of the USB output with direct monitoring and, the most spicy, DSP, which stands for digital sound processing. Yet it will never sound as good as the SM7b paired with a quality preamp and/or an expensive standalone audio interface.