Rode smartLav+ is an omnidirectional lapel mic designed specifically for smartphones. It may not be the very best mic around but it certainly offers a great quality for the price. For a smartphone, you won’t need a high-end microphone anyway. Far more important is the usability: this device requires no special apps nor sophisticated adaptors – just plug it on and you are ready to go. With this mic, you will get a substantially better sound quality than with any built-in and that’s for sure. It is best to be used for recording of a single person’s speech, both with or without the video.

Rode smartLav+ does deliver a superb sound as long as you use it correctly. Rode is a big name in the microphone market and most of their mics have a top-notch performance. However, each particular microphone model has its own specific use, and can’t be used for everything.

Here is how you should and shouldn’t use it. As a lapel mic, you want to clip it onto your cloth, ideally the collar. This setup implies a close to mouth position that allows for clearer and stronger signal while mitigating a good degree of environmental noise. Being an omnidirectional microphone, it doesn’t matter whether you point it upside down or sidewise, etc. as long as it’s close enough to the source. Due to the absence of proximity effect, an omnidirectional capsule is also less susceptible to the shock or handling noise. Touching the mic would still be heard, though it wouldn’t produce those annoying rumbling sounds as with unidirectional models. If a mic slightly slides against the cloth, that won’t be a great deal either.

Ideally, there are two scenarios where you could achieve this setup. The first is pinning the mic to yourself and second – to someone else. Let us now go through a couple of uses for each. While pinning it to yourself you can create some great vlog footage. Just like with an internal mic, you will have a complete mobility, so you can walk around, take video of yourself or anything around you. You can even sing and you will be surprised by the quality. At all times your voice will be heard clearly. Place your phone at a stand and you can make some decent quality product presentations, announcements or anything of that sort. Another great use is to record your own speech. Suppose you speak in public and you want it to be recorded. Just put the phone on record, then place it in your pocket and you are done. 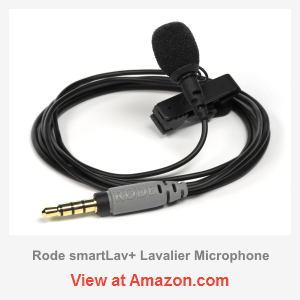 The second scenario is when you have another person speaking. I find it convenient to record someone while sitting across the table. Otherwise, it gets kind of shaky and makes both persons exhausted, although for a short recording any position can be used. It will also do great for small boardroom presentations. That way you can film the presenter as he comments on some drawings, etc. The great advantage of this method is that you won’t need any additional, expensive equipment like wireless transmitters and such. However, this will require a cable extension, because the stock cable is only 4 feet long. You want to make sure of getting a decent branded extension; otherwise, a cheaper cable may result in way too much added noise.

Finally, let’s talk about the limitations of its use. Rode smartLav+ lavalier microphone is once again an omnidirectional model, meaning it captures the sounds equally from all directions. If you want to make point and shoot videos, where the source of audio is other than your own or someone else’s speech and you can’t fix the mic on the target, then it may not work out well. It will still do a way better than the in-built mics, especially in terms of crispiness, clarity and transparency of the sound. However, just like with stock mics you’ll get a relatively low volume on any distant targets, which can be easily overwhelmed with the environmental noise. Is there a solution to this, you will ask? Yes, there is a solution and it’s called a shotgun microphone, which is a standard for any video production. The only problem is that you won’t find any such models for smartphones. And even if you find one that can be plugged in, you will run into a mounting problem.

Another limitation of this model is once you pin it onto someone, only that particular person will be heard. The other sounds will be fainter. This makes it not so useable for 1-on-1 conversations and interviews. This does have a workaround though. You can sit across the table and place the mic in the middle, or better pin it onto something so that it’s slightly raised above the table level. That way both sound sources will have an equal distance from the mic, resulting in balanced sound. However, this setup has a limited mobility and it won’t work for loud environments. Another workaround for interviews is to simply reposition the mic after each replica. Some editing will be required after the footage; however, for a single question conversation it won’t be a huge problem. If this happens to be the main use, then it’s better to get a dual mic model. It will cost you double, but will pay out well.

Despite the named limitations, this isn’t the problem of the mic itself. Any similar device will behave pretty much the same, and I don’t think you will find any better mics particularly for smartphones. To sum it up, Rode smartLav+ is an excellent mic and it’s also well-priced. It can be a treasure for those who know the basics of sound recording, though still it can’t be great for everything. However, no matter what the use is, it will always be better than the stock / in-built microphone. Try to record some singing or even instruments in a decent environment and you will be amazed with how good it can sound!