Sanken COS-11D is a top of the line omnidirectional lavalier widely used in professional broadcast. It is very small (only 4mm in diameter) and easily concealed under clothes. The three main advantages are the size, the most natural open sound and the fact that it produces the least handling noise when rubbing against the clothes. Sanken is a Japanese manufacturer with a long history and COS-11D is probably the most popular mic they’ve ever produced. In professional broadcast, there are plenty of expensive lavaliers that actually sound good but in the end; it all comes down to the ease of use and form factor where this mic is unrivalled.

A bit of history

Since this is the first review of a Sanken mic, I believe it wouldn’t hurt to introduce the company. Sanken has been established in Japan in 1925 by Rihei Takeuchi with a launch of their first factory. In sixties, they have produced various mics that have been used for broadcasting of the Olympics. In eighties, their mics have been used on the radio stations and they have also started to export their production. They have built many experimental and innovative mics to push the industry forward. But here we’re holding the latest Sanken COS-11D, widely used all over the world… but so little talked about, so it’s time to shed some light!

This mic has an open, crispy sound and it’s actually one of the most natural sounding lavaliers out there. Having said that, the frequency response is quite bright but since it’s usually worn under clothes and is not spoken into directly, it balances out well in the end. Compared to some others, it’s rather sensitive or hot, so you may want to turn down the gain a little when using it. Another important thing about COS-11D is that it’s highly resistant to RF-interference, which pays out when pairing it with wireless transmitters. The mesh that it comes with also provides water resistance, protecting it from sweat, perspiration and cosmetics. 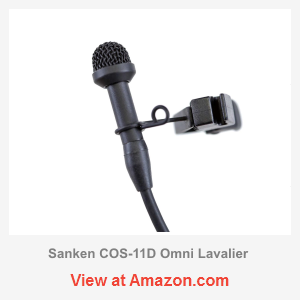 Sanken COS-11D has an omnidirectional pattern, which means it doesn’t matter for example if you turn it 90 degrees off axis, and it makes almost no difference when a talent turns his head while speaking. Despite many mics are labeled as omni, there is still a tendency to become directional at higher frequencies. For COS-11D, it’s only about 2 dB difference when turned 180 off axis @ 20 kHz, which is perfect. Omni pattern also helps reducing handling noise so common for lavaliers when rubbing against clothes. In addition, it has a special coating to reduce rustling, in which regard it is considered one of the most tolerant.

This mic comes with three different terminals: 3.5mm locking connector for Sennheiser evolution transmitters, TA5 universal locking for Lectrosonics transmitters and unterminated. Lectrosonics gear is quite high-end, so it’s more often used with cheaper Sennheiser G3 systems as a replacement to the default ME-2 lavaliers that come with it. Sennheiser wireless is actually decent but the ME-2 lavs are terrible compared to Sanken. Therefore, an upgrade to COS-11D offers a tremendous improvement. If you like DIY there is also unterminated version, so having some skills you can solder it to almost any separately bought connector and it will cost you cheaper.

Sanken COS-11D comes with a metal mesh that serves as windscreen and repels water. Then there is a metal clip with a loop for attaching it onto cloth, usually behind a button where it sits pretty well. You will find a rubber mount for taping it onto body as well. You can probably find even less conspicuous aftermarket solutions but that’s more than enough for starters. Anyway, with such a low profile, the mic is super easy to hide, and the fact that there is very little cloth rustling assures for a versatile placement. Don’t underestimate the power of a miniature Sanken – this mic can give you a sound comparable to a good shotgun or a studio mic!