Sony ECM-44 is a decent quality wired lavalier with a standard XLR output, which can be powered by either phantom power or a single AA battery. It has a bright response with an overall balanced sound and even if it’s not devoid of certain flaws, there is nothing particularly bothersome about it. Except two things – a very low output and a high self-noise. This produces an obscene level of static hiss, which is difficult not to notice. It may be worth buying if you plug it into a quality preamp, digging its relatively unobtrusive bright character, but otherwise you could get better results with other lavaliers.

The frequency response of ECM-44 is smooth and stable. It gives a good tonal reproduction without any added color. The lows are very gently rolled off, so it doesn’t get to sound muddy and the highs receive up to a 5 dB boost, peaking at around 8 kHz. This mic may not sound particularly rich but it has a nice bright character to it and it feels pretty natural. Although the high end does have a tad of grain, this mic still handles it way much better than most entry lavs. However, its performance isn’t that great to compete with more expensive microphones and it’s actually considered only a low budget, entry-level device. 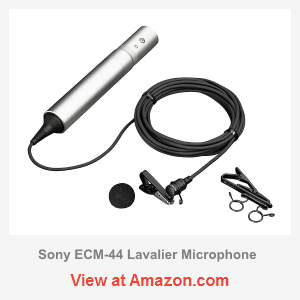 The mic comes with a compact, neat-looking preamp, which can also be powered by the battery and this is a convenient feature of course. However, it seems as though they sacrificed quality along the way. In all honesty, this preamp just isn’t the cleanest out there! Have they actually scrimped on a quality impedance matching transformer or is it a consequence of a small form factor, or simply a poor design? Those questions are out of scope of this review, but what matters is that we end up with more noise and distortions. And they don’t even bother specifying the things like THD in their sheets…

Obviously the noise figures of the ECM-44 are poor. With the high self-noise of 32 dB (non-weighted) and very low sensitivity of only 2.2 mV/Pa it is no better than a $21 Azden EX503. I don’t know maybe some people like the hissing sounds, so it gives them a sort of “vinyl experience” but I’m not a fan. In its price range, Sony ECM-44 is probably the nosiest lavalier. If you have some quality preamp with lots of clean gain in your studio, you can still probably get a decent result but otherwise, you will have to live with the static. For digital recorders it’s not worth it, because you can easily plug 3.5mm mics like Giant Squid Audio Lab and they are twice as cheap than XLR.

Theoretically, you can use it in all possible setups, but there aren’t many uses that would justify buying it, considering that the mic isn’t that cheap and it has some obvious disadvantages. If you need a bright-sounding, wired lav for sit down interviews, it is usable as long as you are doing it in the appropriate place. The mic is omnidirectional, so it won’t do very well in a noisy environment. If you need more isolation, you could also use a cardioid mic like Audio-Technica PRO70, which is altogether better, albeit not as bright. For walk and talk situations – it’s either a recorder or wireless, so the XLR output is usually not required and certainly doesn’t worth the extra money.

In terms of build quality, it is good but nothing extraordinary. The mic itself looks quite cheap – it is just a piece of plastic with a bunch of holes, that’s it. Nevertheless, this does not impact its performance nor does it make it any less durable. The clips are metal and they are quite sturdy, and the cool thing is it comes with two different clips, one for the single lav and one for the double lav setups. The wire is very long – about 3 meters, and it’s thick, so many people will love this. However, it is not detachable from the preamp, which isn’t particularly clean, as we’ve noted.

Bottom line: buy this mic if you want a decent, bright sound and you don’t mind some hiss.