Sennheiser ME 2-II is a basic, entry-level standard omnidirectional lavalier mic that is mainly used with the Sennheiser wireless transmitters, such as G3 or G4 and it is included in many of their kits. It has a 3.5mm locking connector that looks similar to a headphone jack but with a female screw, which makes it only compatible to Sennheiser Audio unless you have an adaptor. In terms of quality, it’s good in a sense that it provides a well-balanced, loud and undistorted sound that is easy to work with. The price Sennheiser is charging for these replacements is a bit too high though, considering this is only an entry-level mic.

In terms of frequency response Sennheiser ME 2-II for the most part is flat, crispy but doesn’t sound too bright either. It has a decent tonal balance and the low end also sounds about right. While it’s all fine for a beginner and beats most of those cheap $50 mics that you plug directly into your phone or camera, it does however fall short of sound quality when compared to professional omni lavs that fall into $300 and above price range category. Sennheiser offers their own model called MKE 2, which is great but there are also other alternatives such as Sanken or Countryman.

So when comparing Sennheiser ME 2-II to a more expensive omni mic, it suddenly starts to sound a bit boxy, and you may hear that it actually resonates a bit in midrange at its own frequency but this is subtle and not very apparent unless you do the A/B comparison. What’s more important is the high-end specter, which although offers the same amount of brightness, there are audible resonances or harshness that it sounds like it could use a de-esser. On the other hand, MKE 2 is more precise tonally, and the highs are noticeably cleaner, not to mentioned superior self-noise and the fact that it seems to pick less background too. 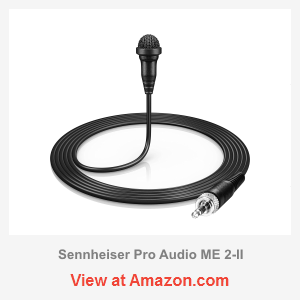 Not only that, MKE 2 has a bunch of other benefits that makes it worth the upgrade. MKE 2 has a more durable cable, which is elastic and just feels nicer. For lavalier mics, the durability of the cable is actually more important than that of the mic itself, because if you damage the cable, the chances of you able to fix it are slim. The clip has a different design too, it inverts the cable so it acts as a spring in case of an accidental pull, which is a small thing but helps to reduce the unwanted handling noise. And of course the mic itself is smaller and easier to mount; it works directly on the skin and it’s sweat resistant too. All these factors enable it for a heavy-duty professional use.

Sennheiser ME 2-II on the other hand, falls a bit more into a light-use category. I haven’t used them for a significant amount of time personally in production because I just straight replaced them with COS-11D. But from those who did keep the ME 2-II, I did hear a couple of complaints. It may sound banal but I’ve heard a few things. The mic stopped working after some time, the cable went faulty or it developed a static noise when used for less than few years. Imagine the disappointment when you bought the replacement and the same thing happens again after some time.

That is why when looking for a replacement you may want to consider going straight to MKE 2 or a similar quality mic from another producer, provided it has a compatible connector of course. In terms of pricing, I do think Sennheiser ME 2-II is priced a bit too high, because once again, it’s only an entry mic and it is plain, without any transmitter or XLR interface, or anything for which you would rightfully charge extra money. And when I give tips on thriftiness, my solution is always to buy a professional mic. It’s better to enjoy the quality MKE 2 for 10 years – spending only once, than enduring the entry ME 2 having to buy replacements again and again every few years – this is only an example of course.