Marantz Professional MPM-2000U is a computer mic, which could be easily mistaken for a studio microphone. It has a full aluminum body, shielded with a quality grille and placed into a shock mount –the only difference is – it has a USB port instead of XLR and hosts a 48 kHz/16-bit audio converter. MPM-2000U features a tight cardioid pickup pattern that results in superior background noise rejection, and it has a larger capsule, which facilitates appropriate capturing of the richness of the vocals and gives more control when it comes to proximity. Superior audio quality makes it ideal for music/vocal recording, but aside from that, it offers no additional features.

MPM-2000U actually has a non-USB counterpart, which could be used for studio recording, so this isn’t just another computer mic; and perhaps that also explains why it has such a minimalistic design. No bells and whistles, yes clean and quality audio signal – this is what Marantz Professional mic is in a nutshell. It may not be as good as an XLR but for a USB mic, this baby sounds beautiful. Compared to Yeti for example, this mic offers a very good signal to noise ratio: the audio you get from MPM-2000U is pristine and has no white noise whatsoever. Cheaper mics so often have some hissing in the background that people start thinking it is normal, well this one will help you understand the difference.

The sound of this mic could be described as mellow, rich, natural, transparent, and crispy. It sounds lovely for a large diaphragm. It isn’t an exact match for a typical studio LDC but somewhat closer to mid-size with 16 mm diaphragm in diameter, but of course, the capsule itself is bigger. I actually like it that way because it makes it a little easier to work with, and widens your sweet spot but gives you the same richness, which you couldn’t get from a smaller diaphragm directional mic. I mean you could, but they are less stable and tend to become muddy or puffy when up close, so you wouldn’t like how it sounds and that is why the lows are usually cut, but with Marantz you can get some nice, unhindered richness.

MPM-2000U’s does not roll off the low frequencies, so if you feed it with bass it will give you the bass, and this is where the shock mount comes into play. It helps to isolate the mic from any surface vibrations that without the isolation would translate into rumble. Shock mount is one of the main advantages of this mic, because if you don’t have one, they will hear your every mouse click and keystroke. The shock mount is of course only basic, but it’s free and it does the job, and could be upgraded or replaced in the future, while most of the USB mics give you none or aren’t even compatible.

If you’ve searched mics before you would have heard the word cardioid many times, which means a directional pickup pattern and the vast majority of computer mics are actually cardioid. This means it is meant to capture what is in front, greatly reduce what comes from the sides and nullify any sound from behind. However, when it comes to USB mics their specs are always sub-par. They don’t reject the sound from the back as much as they should, or even reject the front because of the shitty design. Yes, they may use a cardioid capsule but because of the obstructions inside the body, it often cannot perform its job properly. Well the good news is, MPM-2000U probably beats them all – the background noise is greatly reduced. 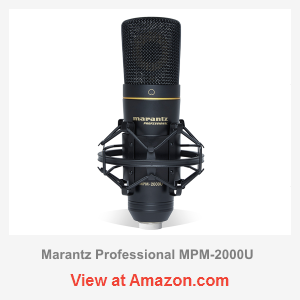 Now of course, you want to get the best of your purchase and the best of your mic, so you have to use it properly. This Marantz mic has large diaphragm, so do not speak into it directly but slightly off-angle. Not every computer user may have this knowledge, but this is how it is designed to work. By adjusting the angle you may get a slightly different sound, so do it according to your liking until you find your best sweet spot and try sticking with it. At close range, you may experience the plosives, which applies to 99% of the mics. To fix this you may want to take it easy with your ‘B’s and ‘P’s, and this could take some practice to unlearn while talking next to a mic, or simply get yourself a pop-filter.

Should you use a pop-filter with the MPM-2000U? Should you buy one, as it doesn’t come with one? Well the answer is yes and no. The larger diaphragm makes it a bit less sensitive to plosives than for example the Blue Yeti but if your mic overloads on your plosives, you should go and order one. Many people don’t realize but it could make a whole lot of difference and make your audio cleaner, especially if you are nitpicking. By far, this isn’t the mic problem; it’s just how things are in recording. Some mics will often stuff foam inside that somewhat acts as pop filter though not as effective and could be dulling the sound a bit, making it less crispy, but our large diaphragm MPM-2000U does not require any foams.

Should you get a boom arm? Well with this mic, I would probably opt to go that route. Marantz Professional MPM-2000U already comes with a shock mount, standard threading adapter included, so you can easily fit it onto any boom arm and point it to your mouth at the right angle and distance. This is important if you want to get the best sound of this mic and a studio-like quality, which is not impossible. Unlike any other mic, it doesn’t come with a tripod or anything to place it directly onto your table, and even if it did, a typical tripod would usually eat a lot of space. So, unless you placed it over your keyboard, which does not make any sense, it could get a bit out of the reach.

Well once again, this mic feels legit and weighs 400 grams, it is a real-deal, durable power horse that is always ready to feed you with a quality sound input. It is perfect for music recording, YouTube or even gaming. Your audience will most likely appreciate how you sound, and the shock mount will assure that no one hears your keyboard. For podcasting however, a direct monitoring capability would be nice, so that you can hear yourself clearly in real time, instead of hitting record and replay but it’s still doable. It is by no means all-purpose but it gives you a good sound quality if this is what you want. On the other hand, most professional mics don’t have any gimmick controls. Solid build and durability are just as important.