Audio Technica AT4053b is another hypercardioid mic, commonly used by videographers indoors. Hypercardioids are supposed to have narrower pickup patterns than the supercardioids but this doesn’t seem to be the case with the AT4053b, which is among the widest pickups in its class and is even surpassed by the supercardioid MKH 50 from Sennheiser. Similarly to the latter, it offers lots of lows that make a rich sound but it just doesn’t sound as clean and could get boomy when up close. The highs are pretty much detailed but start to roll off a bit too soon off axis, which barely gives it any advantage over a decent shotgun, unless you are miking multiple persons at a time.

The frequency response is actually flat, as according to specs but this is only true when two very specific conditions are met, which is being positioned directly on axis and at 12-inch distance from the source. Since it is designed for dialogues however, don’t expect to get a neutral response, because everyone would be off-axis, and then highs start to roll off way too soon leaving nothing but midrange and a bit of overblown lows, depending on the distance. For what it is used it becomes rather dark sounding and could certainly use some high shelf equalization. I can’t say it’s particularly bad or anything – it would be a good sound for a budget mic, not for something sold for six hundred dollars!

– I mean you could buy NTG-3 for this money, a professional shotgun that can work rather well for indoors too.

AT4053b definitely sounds rich but not necessarily very clean compared to expensive shotguns. This is especially true when up-close. The mic does have a roll-off switch that helps very much but doesn’t eliminate the muddy feeling completely. It thus sort of limits its usage to where you can allow more distance with positioning. On the other hand, its side rejection isn’t that strong so you may be capturing a bit too much of the background in a noisy setting. Yet, this also makes it sound a bit more natural in comparison to cheaper shotguns and still helps to negate the comb-filter effects considerably. So the mic isn’t necessarily bad at all, and actually has some benefits of its own… it just doesn’t justify the price for me. 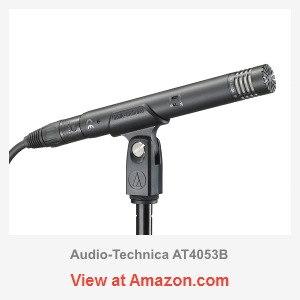 One of the advantages of the Audio Technica AT4053b is that it preserves the lows rather well with distance, which gives it a bit more reach than the other mics around there. In that respect, it comes pretty close to the MKH 50 (even though it may lose quite a bit of highs along the way), and it still sounds quite natural, especially if you aren’t being picky like me. This is where it even beats the Audix SCX1-HC, which thins out with distance much sooner. Of course, in a normal setting for 1-2 persons, this is not the problem for the SCX1-HC, but with bigger groups of people and larger distance, AT4053b can actually shine better, especially in a quiet setting with not too much of background.

Now the only caveat is this mic is very sensitive to vibrations, even to a higher degree than the MKH 50. Therefore, it’s very difficult if not impossible to use with a boom, unless high-end shock mounts are used. This makes little sense however, buying a $200-300 shock mount for a $600 mic… Low cut switch does help greatly with reducing the rumble, so I advise using it when applicable. Still, I can’t particularly advise it for booming, which only leaves one viable option and that is using it with mounted booms. In terms of noise it is rated 16 dB-A, surpassed by both Sennheiser and Audix mics. Usually this is fine but the noise certainly adds up with distance because you have to multiply the signal, so this could be potentially audible in a very quiet setting when the source of the sound is not loud enough.

Audio Technica does offer fairly good budget shotguns but this AT4053b hypercardioid just seems a little bit overpriced. Hell, for a 15-year old model they should consider some price reduction. It’s not like it’s some kind of high-end, irreplaceable mic with unbeatable specs. It may have a relatively flat on-axis response when it comes to the specs, but that’s about it. The off-axis response is considerably darker and the self-noise is rather high, not to mention the side rejection is a bit too weak for a hypercardioid. And yet, if you can’t afford the better MKH 50 and looking for an indoor mic with a bit more reach than the SCX1-HC and don’t mind using stationary booms, while trying to capitalize on that rich low end and natural tone…

- Then Audio Technica AT4053b is certainly a viable option!