Comica VM20 is a budget miniature shotgun with a 3.5mm TRRS output, which can be connected directly to cameras and cellphones, while other DSLR mics require an additional splitter to work with cellphones in particular. The sounds is clear and natural out of the box, which is also crucial if you intend to record and publish videos using your phone. The low cut and extra gain controls are very handy too. In contrast with other mics from this price range, it actually has a solid build and a full metal body. Coming with important accessories such shock mount, wind muff and even a dead cat for the windy weather – all parts are detachable and are neatly packed in a small road case.

CVM-VM20 has an internal battery, rechargeable via USB. It uses a Type C connector commonly found on modern smartphones, and the charging cable is also included in the package. The battery lasts about 60 hours, which is not necessarily impressive if you are fixated on raw numbers. What’s far more important is that the mic has an actual OLED display that shows you precise battery levels, so you can always get the accurate readings and charge when necessary. With other mics, you don’t know when their batteries run out and the indicators are usually elusive too, not to mention the bulging battery compartments, which may feel a little bit awkward.

This mic has a two-step low cut button, which upon pressing will cycle it from flat to 75 Hz and 150 Hz roll off. It is nice to see a two-step low cut on a budget mic because usually only expensive mics have it. The 75 Hz low cut is crucial if you are talking super close to your mic, it prevents it from popping and overloading if for example you accidentally blow into the tube. I usually have it on by default, unless I need to capture some bass, but then I have to be more careful with handling. 150 Hz option is just as useful if you intend to record in an environment with motor noise, refrigerators, air-conditioners, vehicles, etc. There aren’t many useful sounds at those frequencies anyway.

At the opposite end from the tube, Comica VM20 features a gain knob, which allows boosting the output levels by as much as 20 dB, or 10 times when measured in volts. It is actually similar to Rode Videomic Pro, but unlike latter, VM20’s knob produces a variable gain. I can adjust it from 0-10 and always have the right gain for my needs. The knob feels tight and sturdy – it will never turn by accident, so you don’t have to worry about it. When used with my Galaxy cellphone I actually prefer the gain at around 5-level. Why? Because modern phones have AGC (automatic gain control), and they tend to crank the gain too high automatically during the silent passages, making the noise more audible. 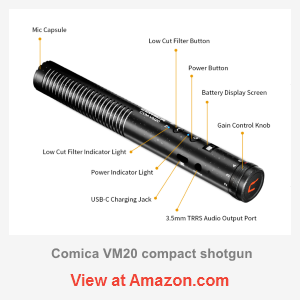 This mic sounds pretty much neutral and natural; it has a wide frequency range, crispy high end and a balanced low end. You can record videos with your phone, upload it to YouTube and get a very decent quality sound from get go. Compared to previously reviewed DSLR shotguns, this may be the easiest mic to work with. Full metal body also protects the VM20 from EMI, which may not sound like a big thing, considering we are only reviewing a budget mic here anyway? – Wrong, cellphones are one of the main sources of the electromagnetic interference, especially when the mic is literally sitting on your phone. Computers can also produce EMI, due to power saving states, so a shielded mic is always good.

On the other hand, signal to noise ratio isn’t that great, which means the mic will be producing a little bit of white noise on its own. This is what differentiates the budget mics from expensive shotguns. Rode Videomic Pro, for instance has a much better self-noise spec, and depending on your preferences may worth the upgrade, but for a budget mic Comica does pretty well, I mean you definitely get what you pay for. An extra gain may also help negating some noisy camera preamps, so it actually isn’t that bad. Anyway, the only time you can hear some noise is when recording indoors at night, with air conditioning and refrigerator turned off. For outdoors it really doesn’t matter, the ambient noise is much higher so the self-noise is negated.

Another difference from the Rode Videomic pro is the dynamic range, and the maximum SPL is lower. The mic will work fine for blogging outdoors for instance, but may not be able to handle extremely high sound pressure – generally, it will work for music but bringing it to a rock fest might not be the best idea. Finally, the pickup pattern isn’t as tight as the more expensive Rode Videomic pro. Comica VM20 captures a bit more of the surroundings, but it is still a shotgun and it is still directional, so as long as you are filming close enough to your target it will do the job. Well at least at a ‘selfie range’ when filming yourself with your phone while speaking for instance, it will definitely do the job.

Comica CVM-VM20 is a nice value for money, compact and road worthy shotgun, compatible with phones and cameras. It’s easy to work with and it has all the necessary features and accessories to start your production. The build quality of this Chinese mic actually surpasses the Rode. The sound quality is quite all right, it’s just clear and natural, so you do get what you paid for. Compared to expensive mics it may struggle catching up with signal to noise and dynamic range specs, and directionality but in this price range, I wouldn’t have to worry about that. If you want an inexpensive but durable, phone-compatible mic with a decent, natural sound and nice features +free dead cat, then of course look no further.