Rode Videomic NTG is a hybrid DSLR / USB mic of a compact size that can be mounted both on top of a camera and on a tripod while connected to a computer. The most beautiful thing about this mic is that it doesn’t have any cumbersome battery decks attached to it (unlike previous models). Videomic NTG is compact and sleek due to the fact that the batteries are stored inside. The internal components do take some space, effectively making the interference tube shorter, but the new tube design with lots of drilled holes makes up for it in terms of directionality. When it comes to quality however, it’s more of a step back, but it’s a fair trade-off for those want a sleeker mic with added USB functionality.

Rode Videomic NTG has been produced after Videomic Pro and Videomic Pro+, which are similar in a sense but do not have the USB functionality. Most of the features have been carried over particularly from our previously reviewed Videomic Pro+. I shall cover them briefly but won’t go into lengthy details because there are plenty of sources that do just that, the mic is being heavily marketed already but every feature adds to the price. Røde even went as far as selling you its exact disadvantages namely, inferior sound quality since computer market is dumb and they’ll buy it anyway, but more on that later.

Now here is the part where I’m not too happy about Videomic NTG. It is obvious if you do some research and comparisons, for example by looking at the specs alone. What’s the buzz about 20 dB pad and safety channel whistles, when the dynamic range of the mic is only 105 dB, whereas Videomic Pro is specced for 120 dB? Here is another thing; the self-noise of the Videomic NTG is 15 dBA, for Videomic Pro it is 14 dBa, sounds like a negligible difference but even Rode admits this mic is noisier and noticeably so, because that’s acoustic noise and the USB transceiver might be occasionally adding a lot more to it. 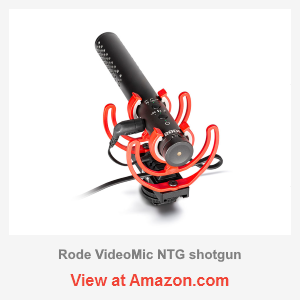 Another clever quick hack is that the frequency response is specified as ±3 dB. If you are ok with math, it widens the range of acceptable parameters to plus side by 3 dB and minus side by 3 dB, thus making it 6 dB, which is enough to make it a complete mess. Meanwhile the response chart looks like a straight line, which it isn’t, because it has been normalized to look nice in accordance with ±3 dB specification, and the divisors on chart are 10 dB, lol, so the actual response has been effectively hidden. Videomic pro and pro+ show much more accurate curves that perform better in reality, even the pro+ is better despite being much more aggressive and directional.

However, that’s only half of the story because the real caveat is the off-axis response, which this time is demonstrated more clearly. If you overlay the polar pattern of the Videomic Pro and Videomic NTG, you can see that the Videomic Pro has a much more stable off-axis response. Videomic NTG is suffering badly from off-axis coloration; the high frequency sector is non-linear and rolls off rapidly. When used inside interiors this may result in bad comb-filtering effects, otherwise it may still require lots of EQ. When used outside there is another issue – wind noise, which is once again worse than in other DSLR mics of this price. Aside from that, Videomic NTG also has a poorer rejection from behind.

Why is this mic so subpar when it comes to off-axis coloration? Well, here is where marketing hype comes into play. Røde Videomic NTG indeed uses a new tube technology, which implies that the mic should be better, but this is not the case. The new tech, unfortunately, doesn’t mean better-sounding. It is a compromise – you sacrifice the quality for the size. Because the batteries have been moved inside, while keeping about the same length of the mic, Røde has had much less space to work with. They did a great job though at keeping a good degree of side rejection, matching that of Videomic Pro. Side rejection is always crucial for shotguns, but not every mic of this size offers a good rejection.

Regarding the build and durability, the mic is pretty much solid and since everything is detachable, you will find it road worthy as well. There are no hanging battery docks, so it’s also aesthetically pleasant. However, one part you should be particularly careful about is the 3.5mm port. If you take it apart, the port is actually surface mounted, which caught me by surprise. If you are familiar with pc gadgets, the vast majority of failures are due to USB ports detaching from the boards. So, using a surface mounting instead of through hole is the worst possible decision one could make when designing the PCB for this class of gadgets. Rycote lyre is also worth mentioning for this build, the cable management is nice.

Time to wrap up with this review, so should you buy Rode Videomic NTG? Personally, I wouldn’t bother because I don’t need a USB mic. Videomic Pro is still just so much better in terms of quality, so for me Videomic NTG is a step back. You can buy a better shotgun for this money, but not every one will come with USB out, so if you really need this functionality it’s understandable. Comica VM20 has a similar concept, it’s much cheaper but unfortunately lacks in side rejection. Videomic Pro is far better choice if you don’t really need the USB and if you want a premium mic with all the features and maximum side rejection then go get Videomic Pro+ instead.