Rode VideoMic Pro Plus is an enhanced version of the VideoMic Pro, where the main difference is the size. VideoMic Pro+ is considerably bigger and weightier than the non-plus version, and although the specs might be similar for the most part, the Pro Plus offers a substantial difference when it comes to directionality. VideoMic Pro+ rejects background noise much more aggressively while focusing more on what’s in front. Tighter pickup pattern translates into a better quality recording since most miniature mics do lack in reach. This upgrade however doesn’t come for free – it gets quite expensive for DSLR and the pattern change introduces a degree of color.

This mic has a clean audio, with very little self-noise of only 14 dBA. This makes it suitable for recording in a quiet setting – not every mic, especially DSLR mic is capable of that. When the recorded signal is low it needs a lot of amplification, so on mics with higher self-noise this could become apparent. At the same time, it has a high dynamic range of 120 dB and specced for 134 dB maximum SPL, so extremely loud sounds aren’t a problem either. This could be useful if you want to record music festivals without degrading your sound for example, but most importantly, it prevents the mic from overloading when used at close range. 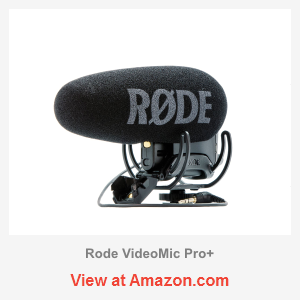 Moreover, Videomic Pro+ has a safety audio channel, which records in parallel but at a lower gain, so even if the main audio has been corrupted, you could still replace the bad parts with the safety audio in your editing software. Overall, this mic gives you a great sound quality, not only because of high gain and low noise, as mentioned early but also because of a tight pickup pattern. Rejection of the surroundings noise is just as important and the shotgun mics are suited for this task. However, when it comes to DSLR mics, the amount of rejection from the Videomic Pro Plus is unmatched. The supercardioid pattern it offers is almost as tight as full size short shotguns.

This is very important, and this is actually the biggest difference between the Pro Plus and the regular Pro version. Non-plus version is smaller, shorter and inferior when it comes to rejection. However, the latter has a more neutral, ready for production response. The difference in the pickup pattern is directly responsible for the difference in sound between the two. Videomic Pro+ has lots of clarity and sounds brighter, but the response is also a bit more colored, the upper midrange stands out, so some basic post processing is recommended. However, if I were to choose between the two, I would pick Pro Plus any time, because the additional side rejection is totally worth it.

This is undoubtedly a great mic from Rode: it offers maximum directionality for its relatively compact size, and produces a high quality, high gain sound signal for your camera. However, I do find the price somewhat questionable. The non-plus version was already somewhat pricey, Pro Plus is definitely an improvement but at the time of the review, the price is nearing a $300 mark and this is significant. FYI, for this money you could get a regular shotgun like NTG-2 and a decent on-camera Rycote lyre such as Rode SM3-R – no gimmicks, no battery holder, full metal shielded body, durable, better response and quality control.

This is not the first iteration of their camera mics – rode constantly improves their model lineups and adds new useful features, but more features aren’t always better. The build quality is about average. The mic body has plastic parts and the battery placement outside the mic in my opinion is little bit impractical. Regular shotguns have a better feel, although unfortunately, they can’t be just straight plugged into each and every camera. Videomic Pro Plus just doesn’t feel solid enough for its price and with more features and buttons there are always more potential problems. Don’t get me wrong, Rode does offer 10-year warranty on their products, but dealing with customer service can be a hassle too.

The battery deck in particular, has a non-standard pin inside, in the middle, which is used for charging the battery that comes with the mic. You must use caution when taking it in and out or replacing it because if you do it carelessly you may damage it and will not be able to record. Another nuisance is that for the price, Videomic Pro+ doesn’t offer any extra accessories. One would think that a premium mic should have premium accessories with it, but this doesn’t seem to be the case. If you want a dead cat for example, you will have to buy it separately. Well, at least it has an integrated Rycote Lyre mount.

If you need a quality sound for your camera and can afford this mic, by all means buy it. This is probably the best camera mic out there that can be directly plugged via 3.5mm connector. However, it is definitely not cheap, and the build quality just cannot match that of a regular sized XLR shotgun.