Maono PM500 is a very affordable large diaphragm condenser, suitable for streaming, podcasting and home studio recording. It exhibits a uniform response and produces a natural, mellow sound. Unlike most condensers in this price range, it is quite consistent when miking up close and doesn’t seem to be affected by proximity. PM500 isn’t too sensitive and so you don’t have to worry about sounding harsh. Consequently, it is possible to record a clean audio even in a noisy setting, as long as the mic is close enough to the source. For professional studio use, it may fall a bit short in regards of self-noise, but the figure is still negligible in a home setting because a typical background is louder.

The frequency response of Maono PM500 is remarkably flat as if it was a reference mic – only the highs are lifted slightly before they start rolling off. This happens after 10 kHz, so the higher end doesn’t have as much air as let’s say a typical SDC. However, the roll off is gentle and the overall curve is smooth and while being actually flat up to that point, this contributes to a natural sound. Unlike some other LDCs, it doesn’t have any sudden bumps in response, which is notable. Thus, you will never hear any harsh resonance or anything like that. On the other hand, the reduction in airy part of the spectrum and the fact that it’s an LDC are responsible for its mellow character.

By mellow I don’t mean ribbon-like when it’s taken to extreme. Rather, it presents itself with feeling less of open air or space. It is certainly not as hot as condenser mics are in general. It will still pick up the background in absence of speaker but it doesn’t amplify those sounds further. In fact, rather the opposite is true. In terms of crispiness, it is definitely crisp and detailed when talking in front of the mic. Not as crispy of course as say an SDC with brightened response, which also tend to be hot, but more like a good dynamic mic, or even a broadcast mic. On the other hand, PM500 is not susceptible to sibilance (which is a very common issue) even when high shelf is applied.

When it comes to lower end, I find it even more interesting. It is rich and extends very low to 30 Hz, but what blows me away is the absence of proximity. Even when speaking up close it gives me a natural sound, ready for production, without introducing any bloating. Of course, one may say this is expected of a large diaphragm mic, for a fact it is so. However, this is definitely unexpected from a mic of this price. For this money, you could barely even buy a cheapest SDC like an AT2020 and even when you do, you would end up having to deal with that… puffy AT2020 sound, which isn’t easy to EQ because the proximity boost is not constant and varies highly with distance.

I am not trying to demote AT2020 of course, but I find it handy for comparison in regards to the proximity effect where Maono PM500 clearly comes on top. I also find it amusing comparing PM500 with broadcast mics because of some semblance in the way they sound. Particularly in the lower end, the female voice sounds almost exactly as when spoken. The male voice may be getting a little bit of a broadcaster effect – if there is a boost, it must be gentle, but I would say it just naturally reproduces the richness of your voice and does it much more accurately than a typical directional SDC – it never gets puffy or bloated and the sound is ready for production. 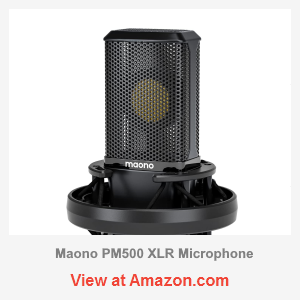 I will now talk about the application of the PM500 microphone. First, I shall briefly cover the possible usage for instruments and then move on to vocals in more detail. In order to get the best out of this mic please be mindful of these three considerations: it has an above average self-noise, it is mellow in character and the maximum SPL is 120 dB. On percussions for instance, SPL could play a limiting factor; for cymbals, it could be too warm, though it depends. In general, if you can get a clean signal from your instruments without the need for gain, it should work just fine. Particularly I believe it would work for guitars (up close), brass, pianos, pipes and bass cabs.

For vocals, the usage is broad. It can be used for voice-overs because it provides a good sound quality and rejects the background noise. The same applies for podcasting, and the fact that any post-processing is optional makes it easy to set up. Also viable for streaming, the trick here is to position the mic in such a way that it doesn’t obstruct the view. I was able to achieve this by rotating the mic up +20°, so that the bottom of the mic faces the keyboard (which also helps to reject the key strokes). The metal pop-shield that attaches to shock mount is quite compact, I point it next to my mouth and it isn’t seen by the webcam positioned on top of my monitor.

Naturally, you may want to connect this mic to a computer in order to record, stream and make videos on the go. Nowadays all you would need is an audio interface, a cheapest Focusrite or Presonus would do, and that will cost you only about $100. Considering the Maono PM500 is quite cheap as well, you can end up having a commendable audio quality at home for just about $200. Compared to the sound of an average USB mic that plugs directly to a computer, the difference in sound quality is simply too big to ignore. Here is a sample recorded in a noisy background environment for the purpose of demonstrating the sound in a typical home setting.

The audio interface I used is actually SSL2+, which is rather luxurious but the two brands mentioned above could do just fine. Nice thing about SSL is that it has a ‘4K’ mode, which boosts highs just a little, and can be quite useful with this mic. Some basic form of high shelf is probably the only form of EQ I would consider applying to PM500. This is because the included pop shield is metal and I believe it dampens the higher frequencies, also speaking off-axis to an LDC will reduce the highs, so that’s a good way of compensating for that. However, this is a versatile mic; you can also speak more on axis and use a regular pop-filter instead to achieve the same effect.

Maono PM500 is ideal for home studio, be it recording of vocals, voice-overs, podcasting or even streaming, and would also work for most musical instruments. Flat on-axis response and minimized proximity effect result in a very natural, rich sound while the off axis response with a large diaphragm gives it a mellow character. This mic has a good clarity but is not as crisp as smaller diaphragms; thus also not as hot to the background. It doesn’t seem to be affected by sibilance or harsh resonances. The sound is ready for production and doesn’t really need any post-processing. Priced so absurdingly low, it also comes with a free shock mount and pop shield.