Electro-Voice RE320 is a large diaphragm cardiod dynamic microphone widely used for radio recording and broadcasting. This mic is fairly sensitive and requires a quieter or moderately treated room in order to be effective. It is great for spoken word and singing when you want to capture all the detail and nuances while giving it a touch of silkiness and smoothness of a dynamic. RE320 is hotter than Shure SM7B and other broadcaster mics like RE20 but not nearly as hot as condensers. On the other hand, it has a better transient response and it’s more forgiving when the talent goes off axis due to so-called “D-pattern”.

Just as one would expect from a large diaphragm studio mic, it provides a deep low-end response with a great richness of sound. It is relatively accurate for not only voice but also kick drums and bass cabs. The strength of proximity effect is moderate but it doesn’t change its quality whether the source is directly on axis or off axis. That being said, it likes to have some space, if you bring it too close it may actually sound too loud and distorted. You definitely don’t want to eat this mic, but when the proper distance is maintained, it sounds smooth without any issue. Just keep in mind that this is a sensitive mic.

Having covered the low end, it is crucial to note about the RE320’s bright character. Although for the most part it is flat, the highs are actually shelved to +4.5 dB, which is quite noticeable. Then again, higher transient response makes it hotter, which some podcasters have little tolerance to. Shure SM7B definitely sounds mellower. Yet this only seems to be relevant if you are in a noisy or an untreated room. In the right environment, the Electro-Voice RE320 actually gives more advantage when it comes to recording. On the other hand, it is also fairly easy to reduce the EQ to complete flat in the mixer. 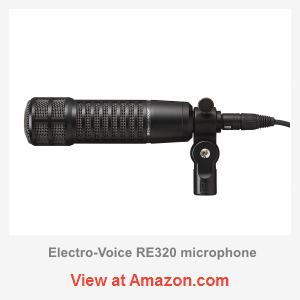 In my personal experience, the RE320 sounds great without any external EQ. It just sounds a bit different from a traditional flat broadcaster mic and may need some getting used to. Then again, it is also a common practice to brighten up the flat mics for the same purpose, so which one is ultimately better in this case might be arguable. Generally, the flat response is the way to go for podcasting and voiceovers while a brighter response is more suitable for music and recording. Just to summarize my point, RE320 is suitable for both, although the SM7B is more suited when it comes to broadcasting.

RE320 is also marketed for instrument miking, which it does justice too. If you’re still heavily relying on the SM57 as a general instrument mic, perhaps it’s time to reconsider your recording arsenal and add some heavyweight toys such as RE320. This mic excels at recording wind and brass instruments like sax, trombone / trumpet and especially their bass counterparts. It is capable of producing a clean sound with remarkable clarity white also retaining the lows. Works great for kick drum and toms as well, for which it has a special EQ mode that scoops out the boxy sound and keeps the unhyped oomph plus the attack.

The mic is literally big and heavy – it is a solid build with lots of metal. However, because it is also longer, it actually looks better on camera than the fatter SM7B; it does not obstruct the face as much, especially when used without mount. RE320 does not have an internal shock mount, so unless you can avoid touching both the mic and the table this is a must. Pop filter on the other hand is optional. Another thing that is worth noting is that the mic has a very high degree protection from RFI, including high-pitched interference from cellphones. But there is no surprise because its main use is for the radio stations.

Best Price on Electro-Voice RE320