AKG Perception 220 is a budget recording LDC microphone used for vocal and instruments. The price of this mic is comparable to that of a USB, which is considered a trash tier as far as recording goes, and yet it is more than capable of a quality performance in a controlled studio setting. It can sound almost as good as 3-5 times more expensive mics with few nuances but usually good LDCs are always pricey. For home setting, I find it a bit too picky but still infinitely better than most of consumer mics featured for computer use. Great choice for starters when recording on a tight budget as well as non-critical instrument miking.

AKG P220 features a relatively flat response curve and warm sound overall. The lows are definitely rich and responsive, though probably not the cleanest. It seems as though it is lacking midrange and instead a bit exaggerating on lows especially when you attempt to mike vocals up close. I don’t like how it sounds when it’s too close for this reason, what’s even more it becomes somewhat harsh on the ears. Perhaps it’s a bit too sensitive to vocals, but having said that, if you give it some distance suddenly it shines and produces a much better studio-worthy sound, which is hard to believe judging by its retail price.

Indeed, if you are using it in a decent environment with the right technique, while giving it a bit of space, it sounds quite impressive. C214/414 will beat it of course but nothing under $250 will for sure. As for home usage and that goes without saying, it will beat the crap out of your USB mic but in a small room, it would pick a bit too much reverb. You would have to get on top of it and then deal with post processing and fixing the EQ. Talking of which, I feel it could use some more brightness especially some presence on vox; nevertheless, it has lots of detail to it and sounds quite crispy on instruments. 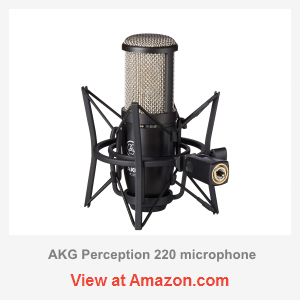 The condenser capsule is of course electret; no externally polarized mics are available for this price. Diaphragm size of the AKG P220 has a solid 1-inch in diameter, and it actually has a significant off-axis coloration, much more than other similar LDCs. That is why despite being normally flat on axis; it really doesn’t sound like it if you are desperately trying to record vocals up-close, because this technique assumes you have to be off-axis. However, given some distance, you can move a bit more on-axis without causing it to sound neither dark nor harsh. This is not so big of a deal on instruments though.

In regards to noise, it’s actually much worse than the AT2035 but still fine, compared to let’s say lavalier mics. This shouldn’t matter unless you are trying to record something whisper quiet, which would be a dumb thing to attempt to anyway on this type of budget gear. The exact figures for the Perception 220 are as follows: sensitivity = 20 mV/Pa, equivalent noise level = 16 dB-A. In comparison, AT2035’s sensitivity = 22.4 mV/Pa, and equivalent noise = 12 dB-A. Using my favorite 20·log10(V1/V2) formula, the difference in sensitivity can be converted into additional 1 dB, which makes an effective 5 dB difference in noise.

This mic has two controls, low cut filter rolling off 300 Hz and -20 dB pad. The roll off could be used for instruments that are above this frequency range. The pad could perhaps be used when close-miking a cymbal… but otherwise I don’t find them particularly useful. On vocals that low cut would really cut out all the juice meanwhile the pad making them inaudible altogether. Not a big deal here, as they are just a bonus. The good thing is that the mic comes in a sturdy case with a spider shock mount, which to me is surprising considering how cheap it already is, but the same goes for the AT2035 its direct competitor.

The build is quite sturdy and stylish. Black metal body of the AKG P220 contrasts with a platinum mesh. AKG brand is also more trustworthy than let’s say CAD, so all that makes for a solid and durable mic. Among the most popular applications are of course vocals, miking of acoustic guitars and other instruments, also working for guitar cabs. Shines as overheads in small, light & jazzy drum setups. They pick up quite a bit of toms and the whole set altogether, however really lack brightness when used on heavier multi-mic setups. Bottom line: AKG P220 is a good and inexpensive starter for vocals that can be later repurposed for instruments.