Sennheiser MKH 50 is a supercardioid microphone, an industry standard for miking dialogues indoors as well as spot miking. It has natural, well-rounded sound, distinctively rich and warm in character. It offers significantly more side rejection than a cardioid but less than an interference tube shotgun. Unlike shotgun however, MKH 50 has very little off-axis coloration, sounds more natural and less susceptible to comb filtering, which is a common problem when interference tube mics are used indoors. Other than that, it boasts very low self-noise and virtually zero distortion, although being quite susceptible to vibrations, it also begs for an upgraded shock-mount.

Sennheiser MKH 50 P48 sounds incredibly rich and warm in character. The highs are also there with just a touch of brightness to retain clarity but the lows are certainly overwhelming. I’m usually not the biggest fan of the sound too rich, dark and warm because the mics producing the sound matching this description always turn up artificially inflated in one or the other part of the low-end specter, ending up being also muddy, puffy or boomy up to a degree. Yet, this doesn’t seem to be the case with the MKH 50, a supercardioid very linear in its response from lows to highs, and this applies to not only direct response but off-axis response too!

When more brightness is required, it is easy to bring the lows down a bit post recording – it responds very well to EQ, so this certainly isn’t an issue. This mic also has a great reach, not in terms of directionality because that’s what the shotguns are for, but in terms of sounding natural and as rich as ever even at a considerable distance like half a meter, when other mics would usually thin out quite a bit and lose their consistency. This is especially crucial for instruments, which is why; it’s perfectly suitable for musical application too. Not only does it have an incredible tonal accuracy that is independent of axis but it also retains its low-end richness with distance. 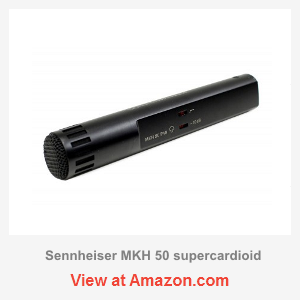 Sennheiser MKH 50 is of course best suited for indoors, first of all renowned as the mic for dialogues. Supercardioid pattern gives it just about enough side rejection to focus on 2-3 people while reducing the room noise to a good degree. With evenly spaced placement, about half a meter above, talents sound pretty natural, rich and equivalent in volume, which is the recipe for a good recording. Unlike the MKH 416 however, it should not be used for voice-overs because it is a poor choice for close miking and doesn’t provide any benefits. With windshield, it can also work pretty well outside yet it cannot compete with shotguns.

There are couple of reasons as to why this is so, first being the inferior side-rejection, which is by design. The other is it is more difficult to handle it, because it’s much more sensitive to vibrations. The mic’s richness has its drawback that it also amplifies handling noises to a great degree, which occur at the bottom of its low-end response. This can be especially heard in a quiet setting when on a boom, and it may be difficult for an operator not to make any noises. There are of course solutions to this other than switching back to a shotgun; one could use a stationary mount or to procure themselves a high-end shock mount, which is what I would advise.

The mic may have some drawbacks, which mostly come down to the problems with the user rather than the mic itself, but it’s pointless to exaggerate and dwell on those because it is best in what it does and I don’t know any other mic that would come on top in terms of sound quality. On a side note, Sennheiser MKH 50 does reportedly have some susceptibility to EMI interference, which according to reports may effect like once or twice in a few years (which is pretty rare), manifesting in a low volume whisper-like sound that is only noticeable in a very quiet setting. I personally haven’t experienced it even when I tried to but I think it is something that may be worth mentioning. The MKH 416 doesn’t seem to be affected or simply offers a better RF protection.

Overall, Sennheiser MKH 50 is a perfect addition to your gear that will complement for a quality shotgun when working indoors and wanting to achieve the best sound possible. Shotguns like 416 could also accomplish this job rather well but there is a variety of reasons for switching to the supercardioid MKH 50. Once again, you may want to minimize the comb-filtering effect that affects shotguns when shooting in the interiors, minimize off-axis coloration when miking multiple persons, or simply want the most natural and tonally accurate sound that retains its richness with a little bit of extra reach added to it.