Azden EX503 is a cheap omnidirectional lavalier, ideal for home use and super low budget production. The quality is about decent: it may not be as crisp and clear as to capture all the inflections of speech but it still sounds intelligible and doesn’t make your ears bleed badly. There are issues with static noise –Rode smartLav+ and especially Giant Squid Audio Lab are way better in this respect. This is due to low sensitivity, so it needs a lot of gain to be applied as well. For beginners and especially broke YouTubers it will be all right. However, I only recommend using it with either a decent camera or a digital recorder.

Get to know Azden

The first thing you need to know about Azden EX503 is that unlike most of the low-priced crap out there, it is manufactured in Japan and the company actually specializes on low end shotguns and other mics for video production. They are a relatively new producer and they achieve better results with every new model. However, this lavalier isn’t one of their new models and it’s also the cheapest, so don’t get too excited. Long time ago, when I did not have any experience, I believed that spending $50-100 for a lav is insane. But that changed when I actually listened to them. In a nutshell, you get what you pay for.

There are good and bad things about this mic but I’ll start with good. EX503 has a more or less neutral response; it doesn’t color your voice much and sounds relatively natural. There is plenty of low end so your voice doesn’t sound tiny like over the walkie-talkie. I know this analogy is a bit strange but a lot of cheaply made lavaliers have this nuance. The highs are also there, but it isn’t particularly bright. Finally, this mic’s sound is overall smooth (except for the upper range maybe). By smooth I mean not harsh, so it won’t be killing your listener’s ears, unless you are screaming or something. 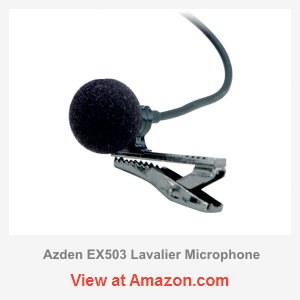 Now I’ll get to unveil the ugly things. As it has been noted above, the mic produces very low output and needs a lot of gain. This makes it worthless in combination with sub-par audio devices that struggle to provide enough quality gain; however, with excessive gain, the static noise and electromagnetic interference also become more noticeable. This mic is not at all the worst out there, and many people can live with this amount of static noise. Nevertheless, if you are a perfectionist, it will be worth considering the Giant Squid. It is more expensive but it has no static noise at all, really.

Another disadvantage is that despite it sounding rich, the low end may not be very accurate and at times, it will get distorted. It works best when you clip it onto your collar, just as it was designed to. For any other uses, I do not recommend it – it is just not as flexible as some other lavs, and it won’t produce any decent results otherwise. It lacks crispiness and the upper highs may sound a bit muffled. There is also a small amount of sibilance, but this is fine, considering the price. Finally, it lacks the detail and definition of more expensive mics. Comparing it to Countryman doesn’t make any sense – at all.

Ideally, you want to pair this mic with some inexpensive digital recorder like Zoom H1. This combo will work pretty well and most importantly, it will be light on your budget. Azden EX503 has an unbalanced 3.5 mm connector, obviously, so you also want to connect it to an unbalanced input. Zoom H1 uses unbalanced 3.5 mm inputs, so they will match. However, Zoom H4n uses balanced 3.5 mm inputs, so they will not match. It is still possible to connect to Zoom H4n but you’ll have to crank up the gain to the maximum in order for them to match, so it’s a very bad idea.

If you have a decent camera with unbalanced input, it will also work fine. Keep in mind that cheap cameras usually have sub-par preamps and you may find the sound lacking quality. Expensive cameras on the other hand, tend to have balanced inputs and again will not match. I don’t recommend plugging this mic directly into computer either. Most computer inputs have sub-par quality and it’s likely to have three of the following outcomes. 1) The amount of noise may reach the threshold of becoming annoying. 2) It may not have the sufficient gain and the sound will be low. 3) There is a smaller chance that it will not even work.

EX503 has a 1-meter plastic cable, which is a bit thick but not reinforced. Some people complain it’s too short but in my opinion, it’s more than enough to plug it into a recorder or camera. For other uses it’s practically worthless anyway, and longer cable would also negatively impact the signal-to-noise ratio. The connector is just basic and it’s not gilded. It will be getting dirty from time to time so do not forget to clean it. The clip is stiff and rugged, and holds in place rather well. However, the foam may get loose over time, so don’t lose it or get yourself some extra foams.

Bottom line, the mic is real cheap but it’s actually decent if you use it as I have instructed in this article.