Shure SM93 and WL93 are subminiature condenser lavs with omnidirectional pattern. Both mics are the same units that terminate with TA4F (aka TQG) connector, designed for Shure’s wireless transmitters, except the SM93 version actually includes an additional preamplifier with a balanced XLR output for wired applications. The preamplifier module is powered exclusively by phantom power, but it drains a relatively low current. Overall, the mic sounds very smooth and as a subminiature lavalier it also offers a great value for money. However, the side address pick up makes it sound somewhat muffled!

How is Shure SM93 / WL93 different from other microphones? The major difference is, this is a side address microphone, which means the sensor is facing the side. This helps to achieve a low profile of only 3.8mm while being 5.8mm wide and 9.4mm long. As a mini lavalier, it doesn’t stick out and it’s hardly even noticeable on the black background. It’s also relatively easy to hide in the hair of the talents. As an omnidirectional microphone, it’s not particularly sensitive to the mechanical noise and allows more freedom of motion. Thus, it is ideally used for TV shows, broadcasting and theaters.

However, as a side address mic, it has its own drawbacks, which Shure has deliberately hidden. They do say that the mic is basically omnidirectional, but search all you want – you won’t find the polar diagram! And since it’s omnidirectional, the users are led to believe that it doesn’t matter how it is being pointed. This is a huge mistake, because although the low and mid frequencies do pass through, the highs are significantly reduced when facing sideways or backwards. SM93/WL93 is exactly the case where instead of pointing directly to your throat, it faces sideways so your voice is coming from a 90 degree angle.

Not surprisingly, the mic sounds muffled – the highs are just not there. But Shure are very smart motherfuckers. Although they didn’t include the polar pattern, they did actually include the frequency diagram. And if you look at it – it is quite bright, albeit only when you are facing the diaphragm. However, in the actual application, the mic is facing sideways to the source, so the highs are rolled off and it becomes darker, which is exactly the opposite of what you see on the diagram. The funniest thing is, as it faces away, it is still bright in relation to the background, but not the actor… 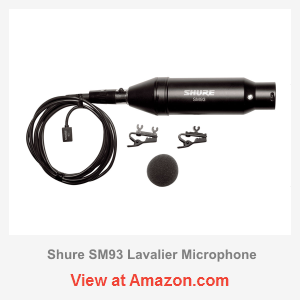 Perhaps, I’m a little bit exaggerating the whole thing, but I think it is important to understand what you are getting, so keep this in mind. Aside from it being muffled, I don’t have any other objections. The sound is pretty good, there is no color, so the voices are natural and intelligible. The mic can also handle occasional singing, but for something more serious like opera singing, you’d better stay away from it! There is a slight difference in sound between SM93 and WL93, because the SM93 has a slightly rolled off low end, which probably happens during pre-amplification but it still sounds relatively rich.

If you want a better quality mini-lavalier, you may as well look at the Audio Technica mics. They are more expensive but you get what you pay for. We have reviewed the AT899 but there are also others. Shure 93 has its own advantages though – it is very quiet for a small mic. However, if you can live with bigger sized mics, it is also worth considering the Audio Technica Pro 70. Not only it sounds better than the SM93, it is also less expensive. However, the AT Pro 70 uses a cardioid pattern, and although the additional rejection is great, there are some situations in which omnidirectional pattern is preferred.

The omnidirectional pattern of the Shure SM93 or WL93 is ideal for situations where you find yourself in constant motion and cannot always pay attention to the microphone. Having it on your chest while looking at the left or right won’t make much difference, whereas with a cardioid mic, variations in the output level would be more noticeable. Another advantage of omni is that it doesn’t amplify the mechanical vibrations, which occur from rubbing it against the cloth or even playing with the wire. However, with a cardioid mic, any mechanical vibrations result in an unpleasant rumbling noise.

Cardioids of course have their own advantages. If you don’t move as much, and don’t turn your head while speaking, it will usually produce a cleaner audio by rejecting the sounds coming from other directions. On the other hand, omnidirectional mics pick up lots of background, so if for instance, you are wearing it outside, it will literally capture all the street noise and what not. It is also not advisable to use omnidirectional mics in small rooms or confined spaces, as they would pick up a lot of reflections from the walls, resulting in a poor sound. They are however fine for the larger rooms, stages, etc.

In terms of build quality, Shure SM93/WL93 does not disappoint. The mic has a durable wire, and it doesn’t seem like it will fail any soon. After all, it is particularly designed for heavy usage. The clip is sturdy too and it leaves a relatively small footprint. This lavalier is not without its disadvantages but overall it gives you a nice and steady performance, and offers a good bang for the buck. At this point, there is also a strong competition from the Audio Technica Pro 70, but as long as you are after an omnidirectional lavalier with a small footprint – Shure SM93 is definitely worth a purchase.