Rode VideoMic Pro VMP is a compact professional mic that perfectly sits on any DSLR camera while leaving minimum footprint. For an average consumer it may seem somewhat expensive, but it is Rode and it pays out with quality. If you want to achieve a decent sound for your recordings this would be a must have addition, as even high-end cameras sound terrible with their in-built mics. Not only can this model deliver a clean and natural sound, it will also help to eliminate the unwanted noise such as hiss, handling noises, etc. Being a directional microphone with a supercardioid polar pattern, it provides a moderate off-axis cancellation allowing you to capture only what you need.

In the professional video production, they usually use boom mics. A typical boom mic allows for more focused recording and as it’s mounted to a pole, it gives a great positional advantage. This leads to cleaner audio with lesser noise and acoustical issues. However, such mics are much heavier; they cost more and require a boom operator. Moreover, they use XLR connectors and require preamps, and so cannot be directly connected to a camera. This implies the use of additional equipment as well as a separate stream of recording that has to be further synced with the video. Don’t want to go through all this? Then use this compact above the camera mic. I truly doubt you can find any better than Rode in this class.

Rode VideoMic Pro Compact has a handy dB pad that allows switching between -10 dB, 0 and +20 dB modes. Although for louder environments and when close enough to the target, you could actually lower this setting, most of the time I would strongly advise using the +20 dB mode, as it helps to eliminate the hiss. The reason to it is that cameras have their own internal circuitries that adjust for the input levels accordingly. This means that if the signal is low, cameras will amplify it and vice-versa. However, in case that a camera has to use an internal amplifier you will get a substantially higher amount of noise rather than if the input signal has been already pre-amplified by the mic. This is because the mic’s circuitry uses higher-end audio components and it’s also perfectly shielded. On the hand, a camera’s internal amplifier adds quite a bit of gain to the circumferential noise induced to and fro its own circuitry as well as the mic’s cable. 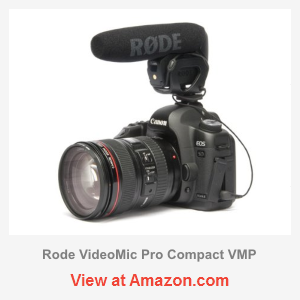 Talking about the mic’s cable, it is unusually thin so that some may consider it flimsy. This is a false impression though, and there is a 10-year manufacturer warranty to back it up, so I really couldn’t care less about its thickness. According to Rode, this design allows for significant reduction of circumference that causes hissing noises. This is actually a great thing, since this hissing noise can be considered as one of the major problems of any camera microphones. Unfortunately, other manufacturers pay too little attention to this problem and produce a lot of noisy models. For a comparison, you can take any $50 mic and see it for yourself. Despite the similar looks, the sound quality is nowhere near the same. Maybe this will be a good lesson for those who fixate on looks and sizes…

Aside from dB pad, there is another control for bass roll-off. This will help to reduce low humming noise and an overblown bass – which is never an excessive feature for a directional mic. Other than that, it has a handy LED indicator that shows if the mic is on.

Rode VideoMic Pro VMP also has a clever shock mount system. It takes very little space while providing an excellent protection from vibration and handling noise. Even if you have the camera on a stand, it is still crucial as vibrations are often picked from the ground, plus there is always a chance that someone accidentally touches it. Like all shock mounts it uses rubber wires, which can be considered vulnerable. The good news, it comes with a pair of extra, just in case.

This mic comes with a stock wind silencer made of rubber foam. It does an OK job most of the time, however this may not be enough if you are filming on a stormy day or in otherwise aggressive windy environment. If you don’t want to depend on the wind, do get a micover windscreen (link below). I recommend this synthetic version because it’s not only cheaper but also substantially better and even cuter than the original deadcat for this model. It’s very smooth on touch and you will love it!

Overall, it’s made of decent quality materials and that gives it an expensive feel. However, a number of smaller parts make the construction vulnerable. This is also true for any other on-camera mics. All of them pretty much require delicate handling and this model is not an exception. It’s best if you treat it the way it is – an extension to your expensive camera. Don’t throw it around and follow the precautions, and it will serve you for a decade. The great thing of this microphone is the size. It is very compact and can be easily packed into a food / sandwich container along with accessories. You can buy those as cheap as $1 from your grocery, but it will give you an ultimate protection as you carry it around.

This mic is actually the newer version of the VideoMic Pro. The first one did not have the lyre suspension and people reportedly struggled with the battery replacement, yes that was somewhat tricky indeed. However, with the new model, changing the battery is a cake and shouldn’t take longer than 30 seconds! There is a good video on YouTube that demonstrates the improvement with the introduction of the battery door for the Rode Videomic Pro and shows how easy it is to replace the battery now: