AKG D112 is a classic mic for kick drums that features large diaphragm, designed for high sound pressure and can handle quite a bit of vibrations. Typically, dynamic mics never boast having balanced frequency charts, especially when meant for kick recording where all you’d probably hope for is a decent low-end. Surprisingly, D112 is rather the exception. This mic is more or less accurate throughout its entire range of up to 17 kHz, and it doesn’t produce those enormous decibel bumps at different frequencies that are quite typical.

The sound of a kick drum actually consists of two components: the resonant low-end and the sharp attack of the beater on the drumhead. The latter has a much higher frequency and depending on how those two mix up, every mic brings a degree of uniqueness. AKG D112 can easily handle both of the components as well as anything in between. Its precision and accuracy makes it a versatile choice for bass drums of any size and even a viable solution for floor toms. 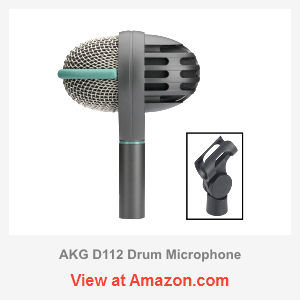 AKG D112 has a distinct egg shape and it’s hard to mistake for something else. The thing is quite heavy as it’s made of nothing but metal, although it may not be obvious from the pictures. This solid construction serves an excellent protection from vibrations, whereas a special capsule design also does a good bit of stabilization. Unlike the Shure’s flagship, it uses a humbucking coil that further helps to reduce the hiss and noises resulting from circumference. The noise characteristics are therefore kept at a higher level.

The mic is connected using a standard XLR output, and as it uses a dynamic capsule, it does not require phantom power to operate. The mounting however may get a little bit tricky. Unlike the rest of the construction, the mounting clip is made of plastic and it tends to get loose as you perform. I believe this is still a small thing though, and not a real reason to reduce the score. Those clips are standard and any good drummer would probably have some handy alternative accessories.

Shure Beta 52A and AKG D112 are probably the two most common solutions when it comes to miking kick drums in general. Despite both are very popular models, they have a significant difference in sound under different setups. I usually pick one or another whenever it feels more appropriate (though more often I lean for AKG). As a rule of thumb, Beta 52A is more suited for larger drums that resonate at lower frequency where it delivers a rich and saturated bass. AKG D112 shines more with regular bass and smaller jazz drums though it’s versatile enough to work with anything. There aren’t any strict rules however, so you should base your choice depending on your personal preference.

Overall, it’s hard to go wrong with this mic. It has a crisp and punchy, quality sound, it is versatile to accommodate for many kinds of drums and doesn’t cost a million either. If you are fed up with the sound of your “no name” made in China mics… this thing will undoubtedly bring a significant improvement!