Sennheiser e835 is a budget mic of above average quality that has a very distinct wide cardioid pattern. As such, it offers minimum proximity effect and it’s quite forgiving if the talent goes a bit off axis. This mic is very easy to handle and it will be ideal for presenters, churches and other non-critical applications. It can produce quite clean, unobtrusive and intelligible voice as long as you don’t push it to the limits, and this is a key point. In terms of gain before feedback, it works great at moderate levels even without restricting your freedom of movement. However, on loud stages it may produce constant feedback.

E835 has a bright response and offers a strong in-your-face presence, which makes it very easy to cut through and yet the higher end lacks some transparency. It’s not too muddy and it’s not inferior to other mics in this price range. Most people won’t notice this, although a seasoned musician may get irked. It still outperforms the SM58 but the transient response isn’t that much better. The upper midrange is a bit bloated and gets outright harsh if it’s pushed too hard, especially on those soprano harmonics that fall into range. 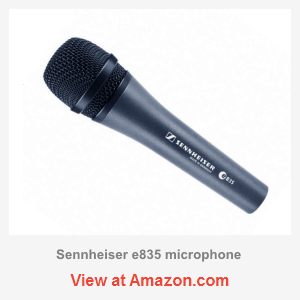 Still, you should not get a one-sided impression about this microphone. Sennheiser e835 is excellent at handling speech, and it has a pretty damn balanced low end. The impact of proximity is minimal and talents will never get boomy. More or less it sounds natural.

Taking brightness into account, it actually performs very well for baritone singers. Some people won’t even need those more expensive mics to sound good and as long as gain before feedback is not an issue, this can prove to be a very good buy. For tenors and soprano, it’s also usable but it may lose some detail and get a bit edgy in the upper midrange.

This mic has a decent quality build, quite similar to more expensive Sennheiser models. Likewise, it is covered by extended manufacturer’s warranty. It uses a humbucking coil that reduces electromagnetic interference, and it has a quality suspension for the capsule, which will effectively minimize handling noise. The body design is where the things get different. In spite of having similar looks, 800 series are for some reason lighter than 900’s. The mesh grilles on e835 also seem a bit weaker and may potentially come off if dropped repeatedly. I’d advise using it with care, since you don’t want to void the warranty.