Sennheiser e845 is a budget version of the e945 supercardioid handheld with a less refined response and a slightly lower output. It is still as good in terms of gain before feedback and the supercardioid pattern it offers is as tight as ever. That is why this mic is well suited for noisy venues as well as back vocals where you want to keep the background noise to minimum. The higher end is as open as other Sennheisers – lots of clarity from this budget mic, which I find amusing. E845 cuts through the mix pretty well and is best suited for tenor type of voice. The bottom end on the other hand tends to get muddy.

Sennheiser e845 is certainly less popular than the e945 nowadays, because the latter is an improvement of the former. It would make more sense to review the e845 first and the then talk about the improvements introduced with the e945, but we have it backwards now and I will be referring to the e945 for comparison. I did mention before that Sennheiser e945 is not quite suitable for “bass” voice type. Some people argued with me that it works perfectly for their bassy voice, but in fact, they were referring the baritone type. Bass voice is very deep and few mics can actually handle it.

Well, the e845 story when it comes to the bottom end is much worse. After having reviewed nearly a hundred different mics, it pains my ears whenever there is mud in the sound. Therefore, I would not even recommend this one to baritone singers. But I am a perfectionist and for the sake of the reviews, I have to exaggerate some points so that you can perceive the difference. Most singers do not notice that there is anything wrong because they have few mics to compare to in order to form a valid opinion. However, this mud isn’t a factor for tenors; it is in a sweet spot where it sounds as good as $300 mic. 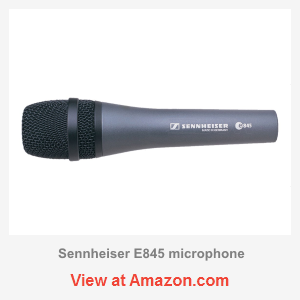 Yes, you can get the best out of this mic if you are not performing in the lower register. And occasionally if you do, there is going to be a muddy feeling to it. Still, for a hundred dollar supercardioid mic, it isn’t bad at all. It is in fact better than the industry standard SM58 in every respect and the amount of clarity in the higher register quite compensates the lack of refinement in the lower end. The e845 is fairly bright and has an extended frequency response, in which regard it may sound more expensive than it is. Yet the E945 is slightly smoother here and better accommodates for the higher pitched vocals too.

I think it would make a lot of sense to compare those two supercardioid mics since they are in a similar price range. Both have their own strengths and there is no clear favorite – it depends on the situation. The strength of the E845 is once again its clarity and the openness of the sound and the trade-off is the bottom end. Beta 58A on the other hand is brighter and cuts through the mix even harder, and sounds very unlike the old muddy SM58. (Don’t confuse the two Shures based on the model number – the Beta is quite different). The tradeoff of the Beta 58A is a bit of noticeable graininess and harshness. In a nutshell, the choice comes down between more mud and more harshness but it’s all relative.

E845 offers a sturdy build, the mic is roadworthy and there isn’t much to break. Both the Sennheiser e845 and the e945 come with 10-year warranty, something not every manufacturer can offer especially for its budget mic version. An interesting visual difference between the two is that E845 has a bigger and wider head but the length of both mics is the same. Both supercardioid mics are equally as good in terms of feedback rejection, EMF rejection and feature low handling noise. E945 is of course more versatile, smooth and refined but for a classical tenor type voice E845 does the same for half of the price!