AKG D7 is a premium dynamic supercardioid stage mic with a smooth and open sound that is quite resilient to feedback. On paper it may look identical to D5 but don’t get confused because there are distinctive differences in the sound. AKG D7 is a step up in quality, and it is also more expensive but fortunately, you do get what you pay for. As a reference mic, it delivers a very natural tone despite its directional pickup. And the gain before feedback is just as the AKG claims – which is outstanding compared to Shure SM58. Although highly versatile in regards to singing styles, it is to be used exclusively on stage and the response is such to facilitate cutting through the mix.

AKG D7 has a big sweet spot and once again delivers a very natural tone, so I find it quite easy to work with. It has a nice clarity with lots of brilliance to it. Open and spacious high end, highs are strikingly crisp for a dynamic but remain rather smooth and do not produce any metallic resonance. The D7 diaphragm has a variable thickness, which is meant to improve clarity. It’s also being laminated in order to smooth out unnecessary resonances and reduce harshness. Think of it as a better version of Beta 58A with extended high-end response, a more refined and less grainy sound.

The low-end of this mic is less prominent. It is by design, so it never gets muddy. AKG D7 starts rolling off at 200 Hz acoustically, and has a passive roll off circuit at 80 Hz. It is designed to smooth out an unreasonable bump it would otherwise get from the proximity effect. You don’t actually need to understand all the specifics, but in a nutshell, it is just lighter on the lows. This helps greatly when cutting through the mix and alleviates the strain from the singer in a live setting. However, in an isolated setting and without the music, it may sound rather cold and may give you a wrong impression. 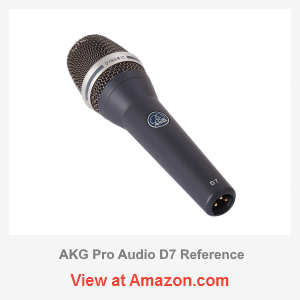 Gain before feedback is not something that can be as easily tested and measured, but it does appear to be much more resilient to feedback than the rusty trusty Shure SM58. This is just another advantage of a well-designed diaphragm with fewer resonance points; while the supercardioid pattern helps further with side rejection. That’s why you will barely be able to make it squeal, unless of course when messing with it intentionally. Being lighter on the low end also helps D7 at reducing the rumbling noise from both handling and wind, especially when performing open air, but those details perhaps aren’t as important.

It is also a good idea to buy some basic foam windscreen when ordering this mic. You may find them helpful on occasions, not for the wind but in order to dampen it a little – D7 can be sensitive. It’s not even about popping but just the way it handles the highs, some people may find it too crispy and detailed to their liking. It sounds almost like condenser, and the foam may help attenuating the highs, making it sound more rounded. To each their own of course, everyone has a different taste. However, the mic still remains more on the bright side, so if you wanted a warmer sounding mic, you should look somewhere else.

AKG D7 has been patiently flying under the radar for quite some time, yet it still easily passes the quality test when tested against pretty much any modern mic. It is a powerful workhorse. Might be a little expensive, considering that D5 is so much cheaper at the time of writing but it is a premium mic. And if it satisfies the qualities for which you are searching for, that we have already described at length, then it could as well be the best mic for you. Regardless of your preferences however, this mic will still be a tremendous upgrade to the likes of SM58, and even the Beta 58A, although maybe not as warm.