Shure SM81-LC is a very neutral and transparent instrument condenser with electret bias. It is mainly used in studios for recording of guitars, pianos and cymbals but it’s also suitable for a wide range of different instruments. It is considered industry standard and although there are plenty of different SDCs available on the market today, few of them can quite match the old Shure in terms of quality. SM81 offers excellent definition, very consistent highs, low distortion and quality low end. However, for a perfect score we would expect a slightly higher voltage sensitivity and maybe $50 off the list price…

Ok, once again let’s start with the frequency diagram. What you’ll see on SM81 is that it’s incredibly flat. All the way until 15 kHz, there is almost zero color. From 15 kHz and above it starts rolling off but it’s quite insignificant. Different manufacturers have been in pursuit for a perfect linear response for decades and many have somewhat succeeded. However, most of those mics would only look cool on the charts but when put in real life recording situation they would sound real crappy. There is a lot more to it for achieving a good sound and the SM81 is one of the few mics that didn’t neglect other factors.

Aside from its non-hyped response, this mic is capable of capturing all the details and subtleties without introducing harshness or graininess, and this is a very important point. Sadly but true, many SDCs nowadays sound blatantly awful: harmonic distortions, intermodulation, phase distortions and sharp resonances are all over the place! And instead of addressing those issues directly, they simply add more brightness so that in A/B comparison they would seem have more clarity. However, recording sound engineers aren’t easily fooled, and the SM81 is what they use most of the time.

Talking about distortions, I’ve not yet finished. Unlike large diaphragm mics, SDCs aren’t that well suited for reproducing the low-end, and this often results to so-called low-end distortions. This is a huge problem and it affect almost every second SDC, to a degree. This is where another quirk comes into play – manufacturers simply introduce low cut filters meant to deaden the low end altogether, instead of fixing it. There are of course many valid reasons to use the low cut filters, but using it primarily to mask the distortions of a poorly designed mic is a bit unethical. 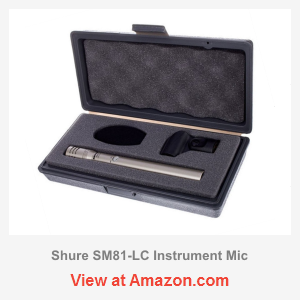 If you think that Shure SM81 doesn’t suffer from a distorted low end, then… you are right! Or at least it is unnoticeable. There is a different issue, it sounds much richer than other SDCs, which is great but it can be overwhelming in the mix. However, it is much easier to roll it off, than to reconstruct what is missing, and the two switchable low cut filters are there for you to help. But let’s note that despite having a beautiful low end, it still won’t replace a good LDC, because we don’t want the reader to form an impression that it can handle everything, and then use it for something it wasn’t meant to do.

Now let’s get to the technical part, particularly I would like to talk about noise. Shure SM81 is rated for 6 mV/Pa sensitivity and 16 dB-A self-noise. While the self-noise is excellent for an SDC, the sensitivity is a bit lacking behind. This doesn’t mean it’s not sensitive! It just means it will require more amplification to match the level of other mics, and this will introduce more noise. With levels matched, it would still produce less noise than let’s say CAD e70 but not by a great margin. In a nutshell, it’s quite decent and more than enough for miking instruments… just don’t expect it to be nearly as silent as shotguns.

Shure SM81 is a brilliant choice for miking guitars although a bit costly. It gives you amazing definition with a rich, realistic low end and mind-blowing crispiness. Positioning of the mic is crucial, so take your time to try, and adjust if necessary. By pointing towards the hole or away from the hole, you can control how much low end gets through to find your ideal balance. I think it’s highly debatable that using bright mics will have any advantage in guitar miking. For instance, CAD e70 is brighter and it works beautifully for acoustics. SM81 is neutral and it sounds… even better! Perhaps it is quality that matters.

Similar to acoustic guitars, it will also excel with pianos and grand pianos, as long as you know how and where to place it – and this is a crucial point. Obviously, even the SM57 in the right place will sound better than the SM81 in the wrong place. But of course there are amazing perks of using the SM81. It allows a much more natural and transparent sound representation and goes deeper than other SDCs, to the listener’s surprise. To tame the lower fundamentals, you need to create an area of pressure, so they don’t just disperse in the room. For this, open the piano only slightly by using a short stick.

For overheads, those mics aren’t just great – they are almost irreplaceable. SM81 has uncolored highs, very insignificant distortion and it’s comfortable with high SPL sitting next to a cymbal. This is where I like using them most, by the way. And you don’t even need the matched pair for them to work, just buy two pieces and you are set. The only problem is that a pair will cost you around $700, which is a bit frustrating. Anything cheaper will likely sound harsher or colored. But there are also better mics! For example, LCT-340 from Lewitt for $499 apiece. If you want a pair for free, you just buy their drum mics kit for $939, then sell the other mics from the kit, one by one, and you’ll get your money back, duh.

There are many different percussion instruments and all of them have different fundamental frequencies. Some will probably sound good, while others not so. As long as fundamental frequencies aren’t very deep, it should give you an excellent performance. Small tambourines, bells and triangles for instance, will sound fine, although they don’t really require that premium quality of a somewhat costly Shure SM81. For drums or snares and larger tambourines, I don’t recommend it. If you want to accomplish it with an SDC, I would suggest looking into KSM 137 instead, which is also used live.

How many times shall we repeat that Shure is capable of making durable things? SM81 is another one of them, and it will work for a decade if you don’t abuse it. The build is rock solid and there isn’t much more to add. The features are as follows, it has a -10 dB pad and two roll off options for low end: gentle 6 dB/octave and aggressive 18 dB/octave. The mic comes with a plastic case, stand clip and wind foam. With the foam on, you can do some outdoor recordings however, it will pick up a lot of environment. Finally, don’t forget that this mic has no internal shock mount and should not be hand-held.