Heil Sound PR35 is a high quality, recording-grade dynamic handheld with an emphasis on presence and a rich, extended low end. This mic sounds very smooth, the highs are clean and there is almost zero harshness. It can be used for high quality live recordings while being stage-worthy and this is a great advantage. On the other hand, in the hands of an unskilled sound engineer and a mediocre quality PA, it may actually sound worse than a grainier SM Beta 58. This mic does not suffer from feedback and works on moderately loud stages, but it won’t always work for every singer.

Heil Sound PR35 is quite known for its clean and rich low end that can adequately reproduce the fundamentals of a deep baritone voice. Yet, it is also known as the mic sensitive to plosives, handling noise and the one that exaggerates the richness beyond the reasonable amount… Which of those statements are true? – The answer is both of them! PR35 is one of the few mics that extends very deep without rolling off. According to specs, the lower limit is 40 Hz, which is very impressive. Unfortunately, at this frequency the mechanical noise and the popping phenomenon do become very prominent.

And it is also true that PR35 can sound overly rich and rumbling, especially if you’re staying on top of it. Obviously, the proximity effect is the cause, but, there is one crucial difference! The proximity effect of this mic is somewhat similar to a studio LDC, which mainly triggers the deep lows and thus barely interferes with the fundamental frequencies of a male voice. Other mics often roll off at higher frequencies, so the proximity effect shifts more towards mid lows. This produces a boomy sound, which is difficult to clean up. However, the deep proximity of the PR35 is easily neutralized with a HPF. 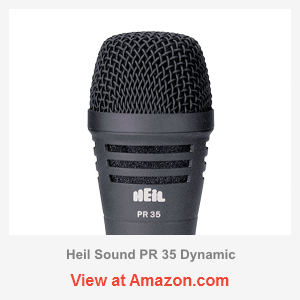 Indeed, all it takes is to apply a high pass, and it also gets rid of the popping and handling noise along the way! So don’t be worried about pop filters and stands, even the included foam – you may find it excessive. If you set it up right, you get a stunning quality low end, but, it takes some work. The sound engineer must know his business and be ready to adjust the filters as necessary. The mic has an additional active high pass filter, which can be activated by a recessed switch but I don’t recommend using it. It is much better to keep it on flat and then do what is needed in the mixing board.

Moving on to the highs, Heil Sound PR35 sounds very smooth, somewhat bright, and crispy, with most emphasis on presence. Indeed, the frequency response peaks at 5.3 kHz, after which it starts to roll off; nevertheless, it doesn’t lack air unless you cover it with a thick foam. The mic cuts through relatively good, but unlike Shure Beta 58A or Sennheiser e945, it doesn’t boost the upper midrange as much. Beta 58A sounds a bit harsher but it’s not afraid of a dense mix and comes louder on top; PR35 can be ideal for Jazz bands and more aggressive music as long as you don’t want to overemphasize the vocal.

This mic is really lightweight: weighing only 255 grams, it is lighter than Shure and Sennheiser handhelds. In terms of durability, it may not be as good but it’s still stage-worthy and you can carry it around without worries. Just try not to drop it and don’t expose it to moisture for a prolonged period. Heil PR35 has a huge diaphragm of 1.5 inches, which greatly improves its low-end response. That size partly explains the high price but as a cardioid mic, it’s still very expensive. Like all modern mics, it uses a hum-backing coil that reduces EMI. The new version also has an improved internal shock mount.

Heil Sound PR35 can be used for commercial broadcast, recording and high quality live sound reinforcement. For a cardioid mic, it has a very good feedback rejection, so it works for moderately loud stages while retaining the natural sound. However, a more aggressive environment may demand using a mic with a supercardioid or even hypercardioid pattern, so keep this in mind. I mainly recommend it for professionals who know their business and do not skip on their gear. However, for an amateur band singer, performing through a mediocre quality PA – this would be a complete waste of money.