Blue Nessie is a relatively new and fancy-looking USB mic with just about decent sound quality. It has some interesting features like switchable recording modes and a touch sensor mute button. The stand is quite tall and it almost raises the mic to the head level but it also makes for a larger footprint. Nevertheless, the stand is non-detachable and the whole complexity of that eye-sticking-out-of-the-socket design makes it vulnerable without providing any feasible advantage. Yes, it does create a unique and unusual look, but is it actually worth paying for? Read on and let’s find out together!

The sound quality can be best described as decent, but it could be better. Despite the addition of three recording modes that are meant to enhance the sound, this mic is still not nearly as good as Blue Yeti from the same manufacturer. I find this somewhat alarming, because the Yeti has been there for over 15 years and the Nessie is one of their newest microphones. Apparently, they are developing backwards as it seems. Similarly, to the Samson’s Meteorite ball-shaped mic, Blue Nessie gets a bit harsh on the highs and certainly lacks the lower end response, though to a smaller degree.

Behold, there is a fix included. The vocal recording mode activates digital processing that does a bit of compression and de-essing. That effectively makes the sound richer and less sibilant, although this also makes the breaths and background sound more noticeable. This somewhat reminds of a studio sound, albeit of highly inferior quality. However, the same old Blue Yeti sounds just as good and more natural without any digital processing involved. Scrimping on the quality of the microphone just to implement the fancy DSP simply defeats the purpose of creating this complexity – bad marketing move.

Finally, there is a third recording mode meant for the instruments. This one doesn’t do much except adding a touch of EQ and brightening the things up a little. So in the end, you will find yourself switching between those modes just to catch up with the original sound of the Yeti, but mind you, Yeti isn’t the best sounding USB mic! On the other hand, there are plenty of mics that sound far worse, so Nessie is still pretty decent. It gives you enough clarity and it’s relatively crisp. There is a bit of honkiness though in the upper midrange, but this isn’t particularly noticeable when using the vocal recording mode. 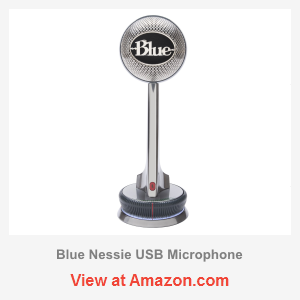 Now as we have disclosed the topic of sound features for all three recording modes, let’s move on to the other aspects. Blue Nessie is good at isolating background sounds and it’s not at all hot like some other mics, but it still lets a large amount of mechanical vibrations through the stand and it’s not surprising. The claim that the mic has an integral shock mount is misleading, because even if it’s actually there – it does nothing. The integral pop filter is working but it isn’t as good as a dedicated pop filter. The bad thing is that unlike with Yeti, you cannot attach a normal pop filter directly to the stand.

The mic produces a relatively good amount of gain without much clipping and this is appreciable. However, I’ve been experiencing a different issue – occasionally, when using it on my new PC, I’ve been getting clicks and jitters and after doing some research, this appeared to be a compatibility issue with USB 3.0 ports. I’m not sure about the scale of the problem and whether or not my mic wasn’t faulty but it did work without any issues on my laptop. When measuring the latency, on average it showed an awkward figure of 24 milliseconds, which is pretty bad for the device released in 2013.

Blue Nessie provides the following functionality. A switch at the back is there to choose between the recording modes, it juts out and can be easily accessed even without looking. The touch sensor at the front acts as the mute switch. It’s a nice feature because you can mute it in an instant, and it won’t produce any clicking sounds, nor will it cause any mic movement. When muted, the backlight on the pad will be flashing. There is a minor disadvantage – sometimes you will be hitting it accidentally without even noticing. Finally, there is a huge volume knob for the non-latency headphone monitoring.

Nevertheless, the monitor feature isn’t very useful, because although you can hear yourself clearly, it won’t mix with the sounds from the computer. So, you will only hear your voice but not the music. Thus, the size of the volume knob is inversely proportional to its usefulness. At the bottom of the pad, there is a layer of rubber, so the mic doesn’t move voluntary but it doesn’t save it from vibrations. The head of the mic extends forward, and then you can tilt it up or down, but it just doesn’t stay upright… maybe it is sad? Worst of all, the red neck part is very vulnerable and it will snap if you apply enough pressure.

Needless to say that with such an awkward construction you cannot expect a good durability. If you look at Shure MV5 for instance, it is a completely different story. Yes, it is plastic, but it sits on an elegant metal stand, which is simple and functional. You can tilt it up, down and sideways and it stays right there, without hanging its head in shame like Nessie. And even better, MV5 offers the same functionality while being detachable from the stand! So if you are a fan of a small footprint or you want a portable solution – MV5 has it all. Not to mention a far better sound… but that’s another story.

Is it worth buying Blue Nessie? Apparently no. There is not a single reason to buy this microphone, because you can get better results with other mics at this price point, without having to worry about the durability. However, if you’ve already bought it – don’t worry, it will still probably sound better than any $50 USB mic out there. It’s not bad at all! Just wait until it snaps and then you can consider upgrading to something better. If you think I have missed on any of its advantages or the reasons why it is worth buying, do share your experience by leaving a comment. We will highly appreciate that!