Shure MV51 is a feature-rich USB mic with a good low frequency response. It works for all platforms, however only iOS users are given the option to access the mic’s advanced settings, as this requires downloading Shure Motiv™ application, which is only found in the Apple Store. Despite an array of features, Shure MV51 fails to satisfy the expectations of most users. The offered advantages are narrow and they come at a cost! No matter how clean the low end is, the upper midrange is clearly washed out, so that’s how it sounds. This of course can be resolved with EQ, but for this price it is barely acceptable.

Shure MV51 uses a relatively large capsule, which measures 1-inch in diameter. By studio standards, it is not even considered an LDC; compared to other USB mics however, this capsule is huge, and the size difference gives it some unique sound qualities. It is important to understand that a bigger capsule does not necessarily make it sound better. Yet it is certainly more difficult to produce, so this explains the high price… What exactly are those unique qualities? For the most part the differences are subtle; one important difference is about proximity effect, which makes a larger capsule more favorable for vocals.

Directional mics have a rise in low-frequency response when used close to a sound source. It’s called the proximity effect. An SDC tends to roll off more at low frequencies than an LDC. So the proximity effect emphasizes the mid-lows in an SDC, but emphasizes the deep lows in an LDC. As a result, an up-close SDC may have a “puffy” midbass boost – a coloration less likely to be heard with an LDC. Because its proximity effect tends to sound better, an LDC is the most popular choice for micing vocalists in the studio.
– www.prosoundweb.com

Shure MV51 does a great job when close-miking vocals, as long as the talent stays on axis. The low end produced by this mic is very clean and it extends deeper than that of competing models. This even allows us to mike bass cabs and double bass, though an average consumer probably won’t make any use of it. And yet there are trade-offs for having a large capsule. Guess, what happens when you are farther aback and off axis? – The mic will start to produce a lot of color! So, it’s not as versatile as they say it is. For close miking it’s fine but if you want to capture both a guitar and vocal let’s say – this will not work.

There is yet another trade off to using this microphone. While the overall frequency response appears to be balanced, the midrange is not as stable as we would like it to be. There is some noticeable color (even on-axis) and for the price, it could be better. Larger capsules do tend to be less flat, but still the midrange is where one would expect the least color. Especially the upper midrange is washed out and lacking. It still has enough presence, so the vocals despite getting softened will retain clarity. However, a voice actor may lose a bit of intelligibility, and musical instruments – some punch and attack.

In comparison, a cheaper MV5 does have a better midrange and less color. The low-end doesn’t go as deep but neither does it sound thin or unnatural. Not to mention there is no need for a pop-filter. On the other hand, MV51 does require a pop filter – unless you don’t mind freaking out your audience with occasional popping. Despite having a larger capsule, MV51 isn’t better than MV5 in terms of noise too. The preamp circles in consumer audio are anyway shyte so the capsule size doesn’t make much difference. The mic is quiet in flat mode, but if you apply too much compression and gain… you better plug your ears… 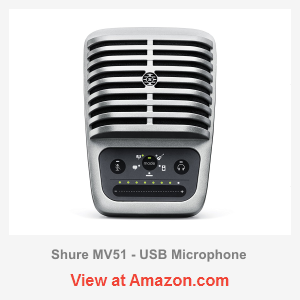 Shure MV51 has plenty of features and settings, which can be further expanded through the app. It offers a 3.5mm headphone output for real-time monitoring. Both the volume and gain can be adjusted by touch controls and the LED indicator will reflect the changes. When adjusting the gain LED turns green, and, for monitor level – orange. You can switch between the two by activating headphone selector button. On the left side, there is a very handy mute button. Since it is touch activated, it won’t make any clicking noise while switching. Few other mics offer decent mute functionality like this.

The middle button acts as the mode selector. You can switch between 5 modes suitable for different applications: speech, vocal, instrument, music and flat. Those DSP’s include various levels of gain, compression and EQ except for the flat mode, which goes out without any processing. Motiv app has access to all of the above settings and includes some additional features, namely compressor, limiter, EQ and wind reduction. Wind reduction is useful if you have fans in the room or if you blow on it, too. The limiter and compressor are way too basic… and the EQ only has 5 bands and doesn’t get rid of the color.

Shure MV51 has a good build quality; it is solid and weighty for the size. While MV5 was all-plastic, MV51 is all-metal. On the other hand, MV51 is also bulkier and could hardly be called portable anymore. Not to mention it is twice more expensive too, at the time of writing this review. There are still 3 reasons to purchase it though. 1) It works very well for close miking, especially vocals, provided that you know the technique and are ready to use a pop-filter. 2) Podcasting also works, it has all the features like mute etc. and the only con is a colored midrange… 3) Excels in recording of bass and deep voice.

However, if you are looking for a good all-around mic, and expect high value for money – it is better to look elsewhere. I believe having that many features is in a way misleading, because one may think that Shure MV51, with all its different modes, should handle anything you throw at it… but this simply isn’t the case. For instance, there are far more versatile mics like Blue Yeti and Cyber Acoustics CVL-2004, which both provide switchable polar patterns and are not limited to close miking. On the other hand, those specifically looking for a larger diaphragm mic over USB will probably love this model.