Fifine K780A is a bloody cheap full size USB condenser mic that comes as a complete package with all the necessary accessories. Most importantly, it includes a decent boom arm, which alone would cost around $20 plus, not to mention the shipping. This is especially true if you would have to buy all the individual parts separately: the mic, shock mount, a foam, boom arm and a pop filter. So, that’s where most of the value comes from. When it comes to the sound quality, it’s actually quite decent for the price but here’s the catch. The whole set combined actually gets bulky and may look a bit gimmicky, for it does look a legit studio mic, but doesn’t sound like one.

The frequency response of the Fifine K780A remains a mystery, because obviously you won’t find it published anywhere. Well, for me this usually raises a red flag, but comparing to the previously reviewed Blue Snowball, Samson Meteorite, CAD U37 and bunch of other trash, I must admit it easily blows them out of the water. It does have some coloration, so it’s not entirely neutral but turns out pretty okay for the spoken word. The low-end is a bit off – I was expecting a richer sound thinking the medium sized diaphragm would pay off. Still much better than the snowball though this comparison feels skewed: despite similar price, a form factor is different.

The high-end actually turns out much better – here the larger diaphragm works out to smooth some imperfections but it does not eliminate the resonances within, so compared to a decent condenser it might be getting a bit harsh quite often. This is especially the case if you drive it to the point of clipping, because obviously there isn’t any compressor circuit to prevent that from happening. What I like about the mic is that it’s not very hot. Often especially cheap condensers are so sensitive to the highs that they become unusable, picking up every little noise and amplifying it instead of attenuating. The Fifine USB does provide some dampening while still being crispy up-close. 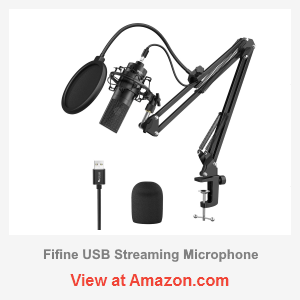 There are numerous advantages of the mic’s included accessories, which complement this condenser very well. Without them, it would barely make any sense. For instance, if you just placed it on a table without the shock mount and tried speaking, it would be a disaster. The point being, that the accessories are very important. However, what I hate about the mic is its size. With such an advanced setup, one could expect a pristine studio sound from their recordings but it only sounds more or less like a regular USB mic, far from worst but not the best either and which could have been made much more compact as well. Now throwing that huge ass pop filter into the mix is like putting a cherry on top of a shit cake.

Needless to say that a big mic, may initially sound like a cool idea but when you actually start using it, you are going to realize that it is obstructing your vision. Even setting it aside is difficult because personally I don’t have any free space on my table. Then, aside from blocking off your monitor, it’s also going to obstruct your face when you’re shooting videos. There are tricks to hide the footprint but the boom arm isn’t very flexible for that, for example you can’t easily fix it horizontally. And with a large pop filter like that it may be difficult to stay on top of the mic, so maintaining a bigger distance could make the noise in the recording more apparent. In that sense, the setup is more appropriate for a studio as opposed to a home setting.

Should you buy Fifine K780A? – It is quite a valid candidate! At the time of writing, I actually have it ranking above the Blue Yeti, simply because of the accessories. You get a nice package that complements the mic perfectly. Everything, even the foam is a good addition, but still all combined, it would never beat our top ranking USB mics. And it leaves quite a footprint, of which you may quickly grow tired. If this is not an issue and you’ve got lots of space and a spacious room too, ideally, and if you aren’t too obsessed with quality then by all means, go ahead and make a purchase. However, I would personally prefer something with a smaller footprint, and if it has to be big, it’d better give me the highest possible quality.