CAD U37 is a very cheap USB mic and while some may not take it seriously, it actually offers the best bang for the buck. Despite having some disadvantages, overall quality is quite decent. This mic is mainly designed for situations that don’t demand maximum performance. Particularly, it will be a great choice for Skype, amateur videos and even gaming. Musicians who make simple covers for YouTube will also probably find it suitable. If this is what you do – U37 may prove to be a viable alternative to more expensive USB microphones… but do not expect anything more out of it!

CAD U37 is a standalone side address large diaphragm back electret condenser with a cardioid pick up pattern and USB output. It works plug and play and requires no drivers. Large diaphragm generally gives an advantage of having a more stable low-end response, which makes it preferable for speech and vocals. Cardioid pick up helps to capture only what’s in front on the mic while rejecting room and ambient noise. Standalone designs is responsible for better acoustic characteristics while also reducing mechanical vibrations. Thus, we already have 3 reasons why it’s better than any built-in mic.

Aside from the standard stuff, U37 offers two useful features that other USB mics do not offer. Namely, the low cut filter and -10db pad, both having respective controls on the front side of the device. Low cut filter has two uses. First, it reduces the low frequency noise, typically produced by mechanical vibrations and wind on directional mics. Second, it prevents an overblown response, which may result from close miking. The low cut isn’t very aggressive and I find it quite reasonable. As for the pad, it helps preventing clipping and distortion from loud sources and this is useful for strong vocals.

On a negative side, CAD U37 is one of those countless models that lack the monitoring feature. How is this important at all? For most uses, monitoring is not needed and you’d rather not hear your own voice while gaming or talking to someone on skype. However, for recording, this functionality is essential and at times when you will want to monitor your voice, you will not be given such option. The problem is that USB being a digital interface imposes the use of buffers, so the signal is not transmitted in real time. For example, when you hit stop on your digital camera it still continues to work for a second.

The data is transmitted retroactively with every chunk being marked by its own timestamp. Once transmission is complete, all pieces are put together and synched back up. Thus, it is quite an unlikely event for your mic and let’s say webcam to go out of sync when recording videos, etc. However, if you try to monitor the signal transmitted over the USB, it will inevitably result in delays and therefore become useless for anything other than an initial mic check. And this is why more advanced USB mics provide an option for monitoring directly via additional headphone output. 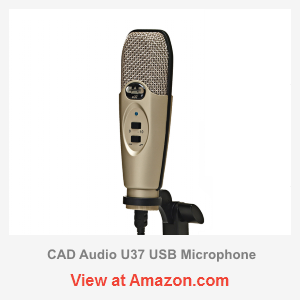 The sound of CAD U37 is quite good although nothing extraordinary. It is very hard to get excited over a budget USB mic after using Neumann’s and Peluso’s. Yet, for those whose experience is limited to built-in mics and consumer headsets, it may as well be characterized as “the best microphone ever”. What’s important is that it’s cheap; it gets the job done rather well, and it doesn’t suffer from any major issues. On the other hand, many standalone mics and especially those found among computer accessories have a large list of problems, to which we could also add a ridiculous price.

Nevertheless, for computer users Logitech sounds more familiar than CAD so they end up buying inferior products at inflated price. This is of course saddening. Also, a lot of people fell for “gaming mics”, which is another marketing hype. As long as microphone produces a better sound – it’s better for gaming and for everything. Though I doubt you’d need a top-notch quality mic to handle occasional shouting on your teammates while shooting down the enemies… whereas an affordable price would certainly make it a more attractive choice. Well either way even for gamers, U37 comes out a winner.

As you may have already guessed, CAD U37 must have its own drawbacks in terms of audio quality. Luckily, those are only minor issues but we should not keep them from the reader. Even though the frequency response is more or less balanced it is not as crisp, compared to more expensive USB mics. The mic’s capsule is likely to be accountable. Funnily, other mics also tend to produce a bit of white noise so it’s not easy to get everything at once. Considering that the sound is usually compressed when the tracks are uploaded to public, this detail can be left unnoticed by the listener.

Another minor issue is that you may find it a bit sensitive to plosives. Those are the sounds of “B”, “P”, “D” and similar. To be honest, all directional mics and even the most expensive Neumann’s suffer from this in a various extent. That is why for best results we strongly advise setting up some decent pop filter. Even a cheap $7 dollar model can make a big difference, so this is not a deal breaker. Positioning can be another key factor in dealing with plosives. For instance, getting too close and parallel to the diaphragm will amplify those sounds… more info can be easily found on the net.

CAD U37 is almost exclusively made of plastic, which makes it cheaper and less durable but also lighter. The grilles are the only exception; those are obviously metal and have a nice double-layered design like on expensive mics. Most importantly, they provide a decent protection for the capsule. The two switches on the front panel do not feel flimsy either, so the mic itself is moderately durable. However, this I cannot say about the stand. Those foldable legs are sort of creepy and seem to be a weak point but at least they can handle the mic’s own weight with no problems.