Apogee MiC 96k behind the simple look offers a polished performance alongside with native Apple compatibility. This device brings a smooth experience for users of iPhone, iPad, Mac and new iPod. However, Microsoft Windows and likely other operating systems are not supported. As the name suggests the mic supports up to 96k sampling rate via 24 bit DAC. Paired with Core Audio interface it also results in a very low latency and can give demanding users a tremendous advantage. If there were such a thing as “professional” USB mic, Apogee MiC 96k would certainly fit this category.

Apogee 96k is a very clear sounding mic. It has an extended response and it’s flat, which means it sounds as is. Flat mics are preferred for recording because of tonal accuracy that also gives more room for post processing. Nevertheless, MiC 96k has one thing that others don’t – brilliant highs that will blow you away, especially if you have some decent monitors handy. Apogee uses some quality mid-sized cardioid capsule and it’s a bit easier to use than a regular LDC (large diaphragm condenser) due to fewer off-axis coloration. It has a good balance of proximity and I’ve yet to hear it “puffy” when up-close.

Successful sound production in studio relies not only on the mic itself but also on other equipment. Even if you can afford some professional stuff, it takes time to learn all the nuances and if you take this route, funnily enough it will take you …more investments. Both in terms of time and in terms of money – otherwise, it is easy to end up committing those seemingly small mistakes, which nevertheless diminish your efforts. However, this is not the case with USB mics, which come with in-built preamps and DACs. You can buy either a nicely made or a badly made unit but unlike XLR setups, it’s hard to mess up. 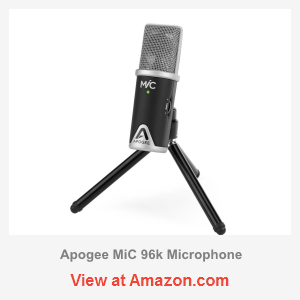 Cheaper mics usually bundle inferior capsules with noisy preamps and sluggish interface. As a result, they sound bad, noisy, delayed and unnatural. On the other hand, a well-integrated unit from Apogee can give you a near studio experience with literally zero technical knowledge… not to mention its portability. Apogee MiC 96k is of course more expensive but the quality is above par. One of the most exciting things about this mic is the interface itself. In addition to its superior sampling rate, the latency is very low and negligible. Another great news, it works even without installing any drivers.

The credits for this interface go to Apple. It’s been invented quite a while ago and called Core Audio. Now it is natively supported by each and every Apple device. Its plug and play capability, superior bandwidth and minimal latency make Apple an indisputable favorite when it comes to USB Audio. I’m not the fan of Apple but here Windows’ framework is clearly at loss. Core Audio simply tramples on Windows drives and even smashes ASIO. Note that USB mics for Windows also produce huge monitoring delays and it’s one of the reasons why so many of them require additional monitoring outputs.

Although initially it seemed somewhat overpriced, when put to test, my other USB mics suddenly got outshadowed by its beauty. As it turns out, it doesn’t need many features to sound great. I still consider it expensive but at least you get what you pay for. Comparing to Rode NT USB, which has no disadvantages and lower price, Apogee sounds more natural and transparent. Apparently, higher bitrate is the reason. Another mic, Yeti USB Pro also features a high bitrate and cost around the same. However, it is far from Apogee and receives way too much negative feedback from the users.

Apogee MiC 96k is actually very compact and relatively lightweight, which once again proves to be an excellent portable solution. Duralumin body feels sturdy enough so you don’t have to worry about the handling. This mic comes with two cables: USB for Mac and Lightning cable for IOS devices. Both are 1 meter long and some may consider it short. You will also find a small but quality tripod as a part of the package. There is yet another interesting feature that helps monitoring the input levels. When the input is detected, LED changes color to green. In case of overload it will turn red, suggesting you should lower your gain.

Note: this mic is probably outdated now, but there is a classic one that never gets old – AKG P120 review.