Sennheiser MKH8060 is a professional short shotgun that features very low noise levels while being highly directional. It has distinctive switches for adjusting frequency response and offers an improved off-axis response at higher frequencies, which helps to reduce the unwanted comb filtering effects when operating in proximity to the walls. It is highly sensitive yet there is no audible distortion and the on-axis response is as neutral as it could possibly get even at 20 kHz. While technically amazing on paper, it is relatively bulky and requires more caution with booming and handling, but you get that extended reach that your ‘go-to’ shotguns lack.

There is a lot to be said about this mic’s sound quality but I’ll start with highlighting its incredibly low noise levels. The spec for equivalent A-weighted noise is only 8 (eight) dB! This pretty much beats every other shotgun I have previously reviewed; not only that – it surpasses the noise level of Schoeps top of the line mics. At the same time sensitivity is very high too – 40 mV/Pa. For comparison, MKH 416 is only 25 mV/Pa with A-weighted noise level of 13 dB. So, we have 5 dB difference in noise plus difference in sensitivity adds another 4 dB, which makes Sennheiser MKH 8060 effectively quieter by a whopping 9 dB.

This however, isn’t as important as it may seem because shotguns are mainly intended for outdoor use where the ambient background noise easily exceeds 50 dB, and for interiors, you could be getting as much from HVAC (air-conditioning, refrigerators, etc.) so plus/minus 9 dB barely makes any difference. No one actually complains about MKH 416 being noisy in the first place. In fact, the opposite appears to be true. While the self-noise maybe lower with MKH 8060, when used outside in a windy setting it appears to be much more susceptible, compared to the MKH 416 where the difference could be audible.

On the other hand, Sennheiser MKH 8060 does claim an advantage when it comes to indoor usage but for another reason. It has a more linear high frequency response and a different tube design helps to reduce variation in polar response among different frequencies while keeping the off-axis response low, which in turn results in reduction of the comb-filtering effects as well as other unwanted reflections. To put it simply, it has a better off-axis response, so in confined and untreated interiors or in proximity to the walls and ceilings, it should have an advantage. Yet, it’s important to consider its directionality too.

To say it has a better off-axis response is only half the truth, for although it may be better in terms of cancelling the comb-filter effects, and has a more stable higher end altogether, the increased directionality comes with its own trade-offs, which in this case actually affects the low-end and midrange instead. Indeed, MKH 416 with its wider pickup pattern does sound more natural than the MKH 8060. When it comes to the timbre of the voice, especially when off axis – it is much more forgiving, despite the steeper roll off at the higher frequencies, which some operators actually use to their advantage by shifting the axis slightly to get more mellow vs. brighter sound without compromising quality too much. 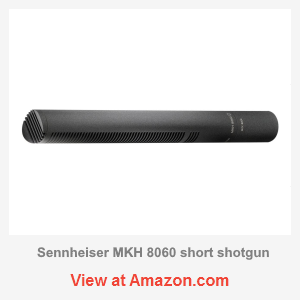 The frequency response of the MKH 8060 on axis is remarkably flat, without a slightest dent or bump all the way to the upper limit, and, probably even extending well beyond. This however doesn’t make it sound any special, so if you were expecting to hear some special “movie sound” you could easily get disappointed. Don’t get me wrong, the sound quality is superb; it has all the richness and openness, and the amount of detail is remarkable too, it’s just flat curves are never exciting and to me 416 just sounds better off the box. MKH 8060 could take time getting used to, though after a while it sounds just as good as your favorite mic.

This mic has three distinctive switches, one for -10 dB attenuator, and the other two for controlling the frequency response, both of which are quite useful depending on your environment. The high frequency boost is mainly used with blimp so it doesn’t sound muffled while covered in a bunch of fur. The low-end roll off is useful for reducing HVAC noises as well as compensating for proximity effect when very up-close, which you shouldn’t be doing anyway. Because switches make openings in the tube, this could potentially result in additional wind noise crawling into your recordings, so some advise sealing them with a tape.

Sennheiser MKH608060 has great specs on paper, better high frequency response and very low self-noise compared to the MKH 416; however, the mic was not meant to be the replacement of the latter, but rather for extending the range of the existing microphone. Sennheiser MKH 8060 does indeed provide a better side rejection and higher directionality but this comes at a price of becoming bulkier: 280mm vs 250mm in length and 25mm vs 19mm in width, (despite the reduction in weight 150g vs 175g) is a significant drawback. Schoeps CMIT 5 for comparison offers even more side rejection than MKH 8060 while having a smaller profile but that is not surprising as their mics are among the most expensive too.

Sennheiser mics however have advantage over CMIT when it comes to humidity. Since both MKH 416 and MKH 8060, as well as previously reviewed Rode NTG-3 are RF-biased, they can work at lower polarization voltages and therefore less prone to failure and crackling noises due to excessive moisture in 100% humidity conditions. When choosing between the two, Sennheisers MKH 416 appears to be even more rugged than the MKH 8060 and less susceptible to wind noise too. MKH 8060 on the other hand is ideal when extended reach is required and its improved off-axis rejection comes handy for cramped interiors, especially when you don’t have time to switch to your hypercardioid or only carry one mic.