Shure KSM9 on the other hand has a little bit less proximity pre EQ though still quite balanced, and suited for any type of stage. And yet, Sennheiser e965 is once again slightly better overall – it is as versatile as the KSM9 and is now considerably cheaper too, and has a larger capsule for a less hyped proximity effect that can be more efficiently negated via low cut filter when the situation demands it. Sennheiser e965 does not lack richness; it may be a bit less hyped than Neumann KMS 105 but it has more depth to it. For a very deep voice, it would be a good idea to use some external low cut when in supercardioid mode (according to taste of course). 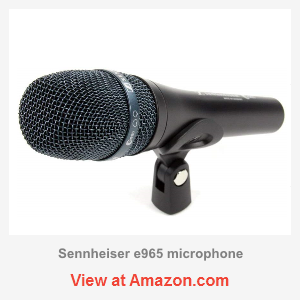