Blue Yeti Nano is a smaller, lighter and cheaper version of the original Blue Yeti USB mic, released almost two decades earlier. For the most part, however both of the mics are very similar in concept and sound – not much has changed. Blue Yeti Nano is short by one capsule, so it doesn’t have the stereo and bidirectional modes, but still offers the most commonly used cardioid and omnidirectional pickups. The design has been simplified as well, fewer controls and the mute button now sits on the knob. For the price offered, this should have been a fair tradeoff, except it isn’t. The mic has introduced a couple of new issues that the original Yeti did not have.

It’s been a while since I reviewed the original Yeti, and there haven’t been as many USB mics on the market at that time. Now the internet is swarmed with new computer mics, there are thousands of models to choose from and it’s getting a bit more difficult to keep updated in all of this chaos. But this has been the trend with computer gadgets in general. Produce more models even if they don’t make sense nor offer anything new… but adding some LED lighting is a must! Irony aside, the USB market did evolve recently, the new mics have come up with built in shock-mount suspensions, which has made a whole lot of difference.

Producers have realized that hearing the hammering of keyboard keys that come from table vibrations isn’t a good thing, so they came up with cheap but effective suspensions to deal with this problem. Blue mics don’t seem to be one of them, because Yeti Nano comes with the same old pad design seen on Blue Yeti that acoustically amplifies those vibrations – for which it has been blamed since day one. Maybe because of the popularity of their original Yeti they wanted this mic to have a similar ‘trademark’ look, which implies the same awkward pad that amplifies your keyboard sounds tenfold…

Well, if you are used to Yeti, you would probably get used to it, so let’s pretend the pad wasn’t an issue. However, there have been another trend going on with all those new USB mics popping up like mushrooms on the market. Many of those mics unfortunately don’t seem to last more than a few years and even become phased out, as I have witnessed while reviewing the Cyber Acoustics CVL-2004 Rainier a few years back. Good sound quality, with neat controls, initially receives a very good response but then come all those faulty units and no one orders it anymore. In that case, the mic had a flimsy USB port that often snapped inside after some use.

And in case you are wondering why I brought up this particular mic example, is because Blue Yeti Nano suffers from the exact same issue. It has the same micro USB port that connects from the same awkward downward angle, and strangely enough, produces the same results. In this case – hundreds of angry customers who give it one star reviews due to the USB port ending up faulty within the first months of use. Believe it or not, I am perfectly aware of this trend with the poor quality gadgets, and this is in fact why I allow a certain period of time before reviewing the newly released USB mics, so I can integrate some feedback from other users too.

One of those user reviews I have read was both disturbing and entertaining at the same time. Blue Yeti Nano has caught fire aka incinerated itself, presumably due to a faulty port, causing a short circuit. I’m refusing to comment on this but in case you really wonder, I’m not making this up. Aside from the flimsy port, the controls don’t seem to be better. The original Blue Yeti had flimsy knobs that could sometimes introduce unnecessary white noise, that or the electrically resistive spray-up inside the knob would wear out ending up with either full gain or no gain at all. Fortunately no gain knob here but the volume knob once again feels flimsy and wobbly.

Same old, same old… at least after 17 years this one thing could have been fixed but no. My expectations are probably too high for this market. The mic body is now also made of plastic, which could be discrediting, but that’s all right with me because the original Yeti was unreasonably heavy. Anyways, I understand that all things have a limited lifespan, and especially computer gadgets nowadays don’t seem to last long. It is just a little bit disappointing to see this new trend plaguing an older producer such as Blue mics. I haven’t personally dealt with their customer service but the rumors are – it’s not good, to put it politely, so if yours got damaged, tough luck sirs. 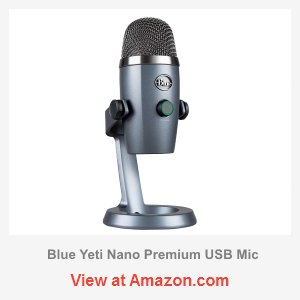 And as if the above wasn’t enough, the physical durability isn’t the only issue. From what I have gathered online, Blue Yeti Nano seems to be quite susceptible to glitches, especially when used with Windows 10. The mic just keeps cutting in and out without any apparent reasons. Even the mute button isn’t a hundred percent reliable, sometimes upon pressing, it may change color to red yet continue recording, to your embarrassment. What’s worse, some of the mics reportedly go bad randomly during recording, starting to produce a series of crackling or hissing sounds without you knowing about it.

As mentioned earlier Blue Yeti Nano features omnidirectional and cardioid modes, you can switch between the two by pressing the button at the back of the mic. Omnidirectional pattern is useful for picking up the sound from all directions in your room, for example if you have multiple sources of sound, or multiple persons speaking. However, the omni pattern also ends up picking up a lot of background, so most of the time you are going to end up using the standard cardioid mode for improved rejection of background noise and unwanted reflections of the original sound that tend to interfere with the latter.

In terms of the frequency response, Blue Yeti Nano sounds brighter than the original Yeti. The sound is crisp and the highs are relatively smooth, which is nice. The low end is also fine in the cardioid mode. However, the midrange is terribly lacking, and if you look at the curve, it is literally scooped out. Therefore, I would generally not recommend this mic for music. And even the voice sounds a bit stripped of the fundamental and harmonic components. You can get an ineligible speech yes, but it won’t be the most pleasant tonally. The original Yeti sounded more flat and natural and it didn’t have this problem, so this really seems like a bummer.

The omnidirectional pattern has a better midrange than the cardioid, but unlike the latter, it actually sounds thin and I hate this, but I would not normally use it anyway. The scooped midrange isn’t necessarily bad if you have a valid use case for it, but otherwise it’s probably isn’t the best curve, especially for close up recording. Normally you want to get up close, but if you can’t, you could still sound a bit richer than a flat mic at some distance, but of course not too far from the mic. Compared to some cheaper USB mics I have reviewed previously, the Blue Yeti Nano still sounds much better.

If you don’t mind the questionable durability and the glitching aspect of the mic, it could actually give you quite a decent sound, especially in non-critical applications such as skype or even reviews for YouTube. But then, if you like this mic’s concept, why not just add a few extra dollars and get yourself the Blue Yeti? I believe it would have been a much better investment that would also last longer and would be more versatile due to a flatter curve. Blue Yeti appears to be a better mic still, and certainly a better investment. The original Yeti maybe isn’t the best mic nowadays but it works reliably well with a boom arm and pop filter (without the pop filter both mics tend to overload when up close).

Could the Blue Yeti Nano be used with a boom arm? Without giving it much thought, you would probably answer yes. Blue Yeti Nano has a 3/8 inch threading and comes with a 3/8 inch to 5/8 inch male-female adaptor, so it can fit onto any boom arm or shock mount as it is more compact. In contrast, the original Yeti didn’t have the adaptor, and it was too big to fit into some shock mounts. But then you are definitely going to strain the cable and damage the port in no time, as I have already explained, and you are going to get that scooped out midrange sound, which isn’t good for up-close, so, if you bought a boom arm and pop filter, it would be a shame to skip the mic upgrade.