CVL-2004 from Cyber Acoustics is a fresh and valuable addition to the USB microphone market. Reminding a lot of Blue Yeti, it offers similar features and performance with one major difference – price. At the time of writing, CVL-2004 is considerably cheaper, and despite certain shortcomings, the value for money is just excellent. To name some of the features, this mic provides zero-latency monitoring via 3.5mm headphone socket, flexible volume and gain controls and switchable cardioid / omni polar patterns. For the price, the sound is too good and it’s balanced very nicely.

From the company that used to produce nothing but low-end computer speakers, it is surprising to admit that their first USB mic actually lives up to the standards set by long-established giants. This mic may not be a technological breakthrough, but it brings some good features and a quality sound at a competitive price. The DAC of CVL-2004 has a standard sampling rate of 44.1 KHz and 16-bit depth. Most low-end mics will have a similar spec; however, this is not a reliable measure of quality. The good thing, there is no any audible jitter, which is a common attribute of any cheap-ass USB interface.

Another good thing, the mic is very quiet even at high gain. By quiet, I mean the opposite of noisy of course. So when you aren’t speaking, you may hear the background but no static or hiss. When it comes to clarity, yet again this mic does not disappoint. The tonal balance is what I love most about CVL-2004. Even though the highs lack accuracy, they are still present and in a good proportion to the mids. It is neither too dark, nor overly harsh or sibilant and, actually works great for speech recording. Blue Yeti does have better and more musical highs, yet on the other hand, CVL-2004 provides a cleaner low-end. 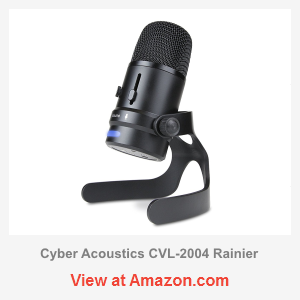 This mic probably has the best controls ever for adjusting the gain and headphone levels. The two sliders are right in front of you… so it’s very easy to access and approximate the settings. The availability of gain control can be another reason to consider CVL-2004, because so far among the reviewed mics only Yeti and Apogee have had this feature. Unlike Rode NT USB and AT2020USB Plus, there is no control to adjust the blending with pre-recorded audio; however, this can be done in control panel. You can set your mic as a playback device without any problems.

Bummer, there is no actual mute control, despite it being clearly listed among the features. In order to mute, you will have to adjust the gain slider all the way down… then probably miss the right setting on your way back up. If you are in a dark room, or in a hurry, you may even mistake one slider for another and mess it up completely as a result. Well okay. At the backside, you can switch between cardioid and omnidirectional patterns. Both capsules are of a good quality and the omni mode works flawlessly. This is a nice addition as it gives you more flexibility and particularly it is useful for conferencing.

At first glance, Cyber Acoustics CVL-2004 Rainier may seem to have flawless design… Die-case body with a cold ass grille is a rare find among sub $100 units. Then again, it has quality controls and no parts sticking out to break off. However, there is one major flaw – vulnerable USB port. If you look at NT USB or AT2020USB, both of them utilize a solid Type B connector. Blue Yeti uses a Mini USB, which is also fine. Now guess what do we see on CVL-2004? That’s a Micro USB connector! And considering it is located at the bottom – this is really the worst design decision they could have made.

I will try to explain what I mean as best as I can. Sometimes you just cannot avoid accidental pulls of the wire, especially for devices like mics – they really beg for it! Just kidding… in the event you pull the wire, it cannot unplug but will apply a lever force to the connector and, Micro USB connectors are very flimsy by design. There is a big chance your connector will snap, or worse damage the port and render the device useless. Fortunately, there is a workaround. You can simply tie the wire around right leg of the microphone. Then it should be safe even if it falls off a table.

This mic I definitely recommend for streamers and podcasters. Out of the box, it produces an expressive, good enough quality sound most people are after. Cardioid pattern does a decent job of isolating your voice and no hiss to be heard in the background. Then you get two meaningful controls for gain and volume right in front of your nose, which you can easily adjust on the fly. It could be even more appealing had they actually implemented the mute control. Still… it is quite a package for the money, and in this price range, few can match it in value. Finally, the Rainier can be a viable alternative to Blue Yeti.